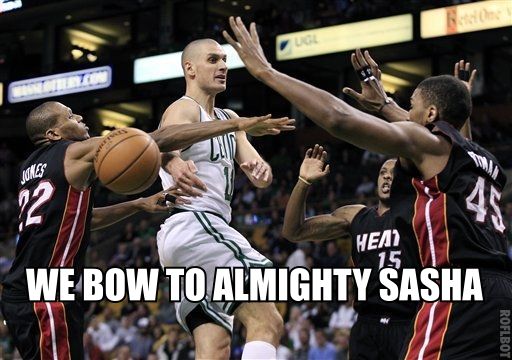 It was a scrub show in Boston Tuesday night. With many of Boston's players hurting - Ray Allen (ankle), Greg Stiemsma (feet), Mickael Pietrus (knee), Rajon Rondo (back) and Kevin Garnett (hip flexor, but really just rest) all sat out this game against the Miami Heat. Paul Pierce actually requested to suit up for Boston and scored eight points in a limited 17:56 minutes.

The result? Sasha Time! Sasha Pavlovic scored 12 of his 16 total points in the fourth quarter as the Boston Celtics pulled away from Miami to secure the 78-66 home win.

It was really rough to watch in the beginning (the score was 34-28 at half time, and the Celtics were 4/17 in the first quarter). Dexter Pittman led his team with 12 points and James Jones was right behind with 11 (his third highest total of the season). The Heat built an 11 point lead early on in the game but the Celtics - led by Sasha Pavlovic and Marquis Daniels (13 points) - rallied back in the second half to erase the deficit and build a lead as high as 18.

Avery Bradley struggled in this game, shooting 2-for-10 from the field and having his shot blocked three times. Still, he scored eight and had three steals. Brandon Bass had eight points and eight rebounds.

The Celtics stay alive for a chance at home court advantage over Atlanta in the first round of the playoffs, which the team obviously doesn't care very much about anyway. Boston also takes the season series against Miami, 3-1. The Bulls now clinch the first seed in the East with the Miami loss.