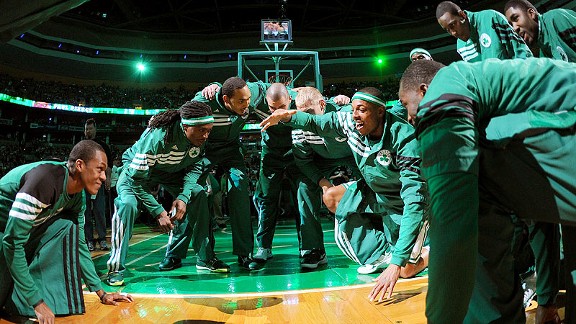 Two years ago the Celtics played .500 ball the 2nd half of the season, yet still made it to the NBA Finals. Last year the C's played sub .500 ball the 2nd half of the season and were knocked out of the playoffs in the 2nd round. This year the Celtics seemed destined to regress even further unless they made some roster changes. The two key additions were supposed to be a full season of Jeff Green and David West. Then in about a 24 time frame we lost both solid forwards. So it was then the Big 4 and question marks.
Since then the Celtics have lost their starting center, Jermaine O'Neal, and backup big man Chris Wilcox for the season. But a funny thing has happened along the way. The Celtics look as good as ever. They're beating the teams they're suppose to beat, while also upsetting the supposed elite teams. They've gone from an old, unathletic bunch to a quick and feisty team that is the proverbial "team no one wants to play in the playoffs." 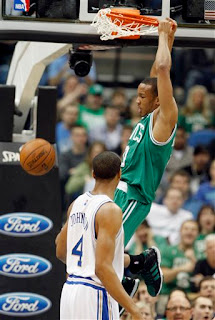 The Celtics were not getting the most out of Rajon Rondo trotting him out there with slow players at the other four positions. Kevin Garnett was no longer quick and athletic as a power forward, but now as a center he's back to being quicker than his opponents. As great a shooter as Ray Allen is, at the age of 36, he is now one of the slowest starting shooting guards in the league. This basically negates whatever speed advantage Rondo has over an opposing point guard. Avery Bradley might be one of the quickest shooting guards in the league. With Rondo and Bradley the Celtics might now have the fastest backcourt in the league.

A fast, athletic backcourt and speed at the 5 position has transformed the Celtics into a lethal team. All the advantages that KG used to have against slower 4's, he now has again against slower 5's. Credit Doc for this switch. Also credit Doc for telling Avery Bradley to model his offensive game after Andre Miller. Just cut to the hoop and Rondo will find you. Bradley needs no help on defense as he came into the league ready on that end.

Paul Pierce and Brandon Bass aren't the quickest forwards, but they can hold their own. Both can shoot from the outside (along with KG) which leaves driving lanes open. It's a pity Jeff Green isn't able to play in this new Celtics offense as it would have fit his skill set much better.
Another two keys to the Celtics resurgence is the health of their three best players- Rondo, Pierce, and KG. To win big in this league you need top level stars and for them to be healthy. The Celtics have three. If the Mavs can win a title with Dirk and a supporting cast, are you telling me the Celtics can't win with Rondo, KG, and Pierce? Name any player on last year's champions other than Dirk better than any of those three? The key now is the health of the supporting cast.
The Celtics are 3 deep down low and can't afford an injury to any of them. If for example Bass were to get hurt, all of a sudden Stiemsma is playing center, KG is back to power forward and we've lost our athleticism. Also, Mikki Morre Ryan Hollins might talk a good game, but he's not a rotation player on a contending team. He's filler, capable of a highlight dunk or occasional block, but he can't play defense or rebound. Celtics can't have any more big man injuries.
Sasha Pavlovic and Marquis Daniels are capable regular season backup small forwards, but let's hope Mickael Pietrus is healthy soon. He's been the best backup wing fit for the Celtics since James Posey.
Backcourt wise, Rondo, Bradley, and Ray should be enough, but it's nice to see that Keyon Dooling can provide minutes in a pinch. Honestly if healthy (that's the huge qualifier) these Celtics have the chemistry and balance to bring home #18. And as Celtics part owner Steve Pagliuca recently stated:

“This is probably the most positive group of guys we’ve had here in 10 years. They’re tight. They care about each other.” 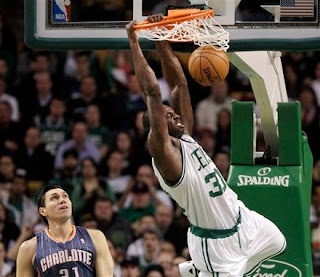 I speculated about this way back in preseason. When you get rid of all the high maintenance headaches like Shaq, Big Baby, Rasheed, Marbury, Delonte, Wafer and Nate it becomes MUCH easier to coach a team. Those players might not all be bad guys, but they are high maintenance. This team right now just goes to work. And with no in-season trades to mix things up, ubuntu and team togetherness has made a comeback.

You can't discount what a close knit team who has their coach's back (and he has there's) can do in the playoffs. If healthy the Celtics have as good a chance as anyone to make it out of the Eastern Conference. Rose and Deng are hurt and Doc is a better playoff coach than Thibs. The Magic scare no one. The Heat "should" make the finals, but they are erratic and LeBron's HGH batteries only last 3 quarters.

Out west, I see the Thunder making the Finals. Mike Brown's Lakers are a sinking ship and the Mavs had their year last year. If not the Thunder then probably the Spurs (which would be a better matchup for the C's). To sum this all up, my advice is simply (in my Wesley Snipe's voice): Don't bet against the green.