It's official, Celtics to play Hawks in 1st round 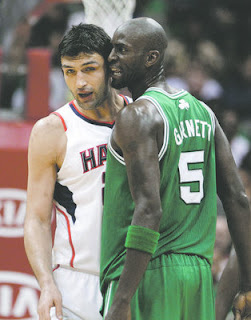 By virtue of Atlanta's loss to New York and Orlando's defeat in Denver on Sunday, the Boston Celtics are now locked in to play the Hawks in the opening round of the Eastern Conference playoffs.

What remains to be decided is where the series will open. As Atlantic Division champions, the Celtics will be the No. 4 seed, but home-court advantage is determined by overall record, meaning the No. 5 Hawks can still host the series. In fact, Atlanta (38-26) owns a 1-game advantage over Boston (37-27) with two games to go. The Celtics are aided slightly by owning the tie-breaker in the event the two teams finish the season with matching records.

The Celtics face the Heat and Bucks both at the Garden on Tuesday and Thursday respectively (Purchase tickets), while the Hawks face the Clippers and Mavs on the same days. Personally I don't care about home court advantage. If the Celtics can't beat the Hawks because of one less game in Boston, then there's no way they're taking down the Bulls, Heat and Thunder. And in Boston we care about championships, not making it simply to the 2nd round.

The Hawks/Clippers game is also important for us because of draft reasons. We want the Clippers to lose, as we own their pick. And it would also help the Celtics with their own pick if we also lose these next two. I'm not saying they shouldn't play to win. If E'Twaun Moore, JaJuan Johnson, and Sean Williams go off and we win a game, Im fine with that. I'm just hoping Doc rests everyone important to getting #18 these next 2 games and my guess is he will.

If you want to go ahead and purchase your Celtics/Hawks playoff tickets for less, click here for the best deals.