I posted this late last night on twitter, but figured there might be some people for some odd reason that don't follow our twitter, so here's Doc Rivers speaking to CSNNE's Greg Dickerson on his growing concern over Ray's ankle issue (video after the jump: 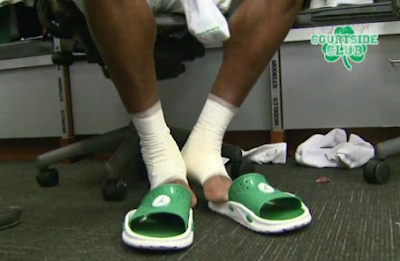 "It's growing because playoffs are coming closer and he's yet to play. When that happens then it grows. We just have to hope that he can get it back, get healthy and feel great on the floor...The fact that he's not playing means that he can not play. (Doc stating that if the playoffs started today, Ray wouldn't be able to go)"

Ray has now missed 7 straight games and 13 of the last 18. He's had ankle issues in previously (which have shut him down for a season). Ray will turn 37 this Summer and one should be able to see why Danny tried to explore trading Ray at the deadline. Ray is still an elite shooter, but that's really all he brings to the table right now. And with age, one's body starts to betray you (no matter how religious one is keeping in shape).

Hopefully the Celtics medical staff can work some magic and get Ray healthy enough to contribute once the playoffs start. Then the challenge will be to keep him healthy. You don't want a situation where he plays a game, sits 3, plays 2, sits 2, etc. Ray is a rhythm shooter, so that would affect him especially. If I were Ray in the offseason I'd go see that specialist in Germany that treated Kobe last Summer (Bynum is going to him this Summer as well). But for now, Ray's creaky ankles are in the hands of the Celtics medical staff.