Comments from the other side - Wolves 3/30 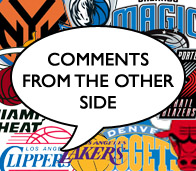 That was fun.  I love it when KG gets so fired up.  He's so much fun to watch.  Wolves fans have mixed feelings about the Big Ticket: fond memories, feelings of betrayal, love, hate,admiration.  You name it and there is a fan feeling it.  I think the comment that cracked me up the most was "Hey look it's that guy we traded for Al Jefferson".  Of all the hate for KG, Rondo, and Pierce on boards, this is the first one I've found with real Sasha Pavlovic hate.  Guess having him on your team for a year will do that.  Lots of fun comments today.  Any favorites?

I suspect KG is not going to be received well by the crowd. I loved him when he was here but I have grown very tired of his attitude.

KG was over for me when he played for the first time against us and he pounding his fist on the Celtics sign. Disrespectful SOB

I hope there is a stream with the Wolves commentators because I almost punch my computer screen listening to the reverse garbage disposal that is the Boston color commentator.

KG has always been a jackass. We just tolerated it when he was playing for us and was the "underdog."

KG probably get booed, He has turned into a big douche since on the Celtics, and thrown the wolves under the bus with the recent comments I read.

He threw management under the bus, not the fans.

I just find it shocking that no t wolves fan likes KG.

Well, we did when he was here. But the man is full of excuses in late game situations, bad mouths a team that set his family up for generations, bullies only little guys, and has burned his bridges with Minny fans. I am all for an athlete speaking his mind. You then need to live with the results of what you said. We tucked it away when he played here. Bullying little guys, being selfish, hiding in the corner when it was winning time. The CBA was what is was, so its our owners fault to some degree, but when KG asked why he couldn't get help, he should have looked at his direct deposit of $770,000 every 2 weeks and had his answer.

Rondo will probably get about ten assists to Pierce alone

Hey look it's that guy we traded for Al Jefferson

Rondo just threading right through out defense. 7 assists already and we're not even finished with the 1st quarter.

I'm really worried about Paul Pierce in this game Do we have anyone who can even slow him down?

Apparently Short answer to this question is “No.”

Damn, listen to the crowd when KG scores.

The sweat is dripping off KG already

Celtics jerseys are a classic sport design. Up there with Arsenal’s red and white, the New Zealand All Blacks, Barcelona. And we’re wearing Muskies uniforms. A team that existed for one, single solitary year.

Bass just blew by Williams from the top of the key off the dribble with no picks or help. How is Williams a 3 again?

The Steamer would make a nice backup to Pek.

Did the folks at CelticsBlog stay up all night coming up with that name? Just a reminder of how cool Canis Hoopus is as a blog moniker. Hands down has to be the best in the NBA.

Who are these people cheering for Boston at Target Center

Kevin Love's getting outplayed by a dude with a blonde fade. C'mon man!

Far far too many green jerseys in Target tonight.

Awesome, pavlovich in We have a chance now…

Oh god Sasha frickin Pvlovic is playing. He was on the court for less than a minute and took a shot. What a shock.

They are going to Sasha for the final shot Are they even taking us seriously?

Also Rajon Rondo has fantastic handles Watching him dribble around the court is an education.

KG is so unselfish, always passing to the open man Even when it’s Sasha Pavlovic

How is pavlovic still in the league?

Sasha's gonna Sasha How he's getting minutes with the Celtics I'll never know.

Can we please be aware of rondo?

Of all the things about KG That dude is seven foot tall, not 6’11"

What does Pavlovic do that makes him an NBA player?
Collects a paycheck

By "wide open", do you mean in an empty gym?

KG was telling everyone what to do on that last possession. “Go to him! Now come here! Pick n Roll! Shoot!”

Keep Pavlovic out of foul trouble!

Good golly KG can play some defense Textbook closeout And shaded Love in his weak direction and trapped him. Textbook.

That was actually kind of funny. KG never got out of his crouch.

This is going to be a long night.

Longer than a Darko snack break.

Longer than a Rubio autograph signing at an all girls school...

I guess we think Boston is playing with 4 players because we're acting like Rondo is invisible...

If they are, Mrs. Rubio has some ‘splainin’ to do.

Boston is a HORRIFYING defensive team Why isn’t their record better?

It's a bit sad\ When the vanilla ice concert had more energy than your basketball team.

Like most Wolves fans... I loved KG…but now I just want to see Pek flatten him. Wish he was playing tonight :-(

KG Is in Love’s head

I don't remember KG setting the worst moving screens in history with us, which he has been doing a few years now. Could it be that we were so blinded with homerism we didn't see him getting away with pretty much everything?

A lot of Garnett's defensive game Seems based on intimidation. Did anyone else see him punching away Kevin loves arms there.

The Truth is pretty good.

Did old Kevin block that 3 by new Kevin?

Man, Stiemssma is a helluva a perimeter defender.

How in the hell does rondo get these boards?!

How does he have 16 assists?
You get an assist by passing to a guy that makes a shot He did that 16 times!

Is it wrong to dream about Paul pierce wearing Muskie blue and gold?

Luke and Kevin vs the universe If we could get as much out of our Steamers and Doolings and Bradleys…we’d be good.

Well, they are playing Steamer and Pavs...

Hard to imagine that Miller was ever a basketball player

I might prefer that to what he's doing on the court right now.

It would be more entertaining to watch, though equally as sad

I would shit my pants if I were a point guard playing against Boston's D.

Before, during or after the game?

I would be wondering... How on earth Keyon Dooling and Greg Steinsma are playing this well against me

We did better in the Marcus Banks era than this. We can't handle toughness and our defense is a joke compared to defense like this.

"why have one good player.…when you can have 35 SASHA PAVLOVICS?” -glen Taylor

Anyone else having issues with league pass tonight?

Yes, they're showing some horrible game

Kevin Love has been outplayed in every aspect of the game by someone who is 12 years older than him. That’s bad.

Garnett (and that terrifying Boston team D) have really made life tough for Love.

To be fair, Rondo's assists have made Garnett's scoring easy And he’s the biggest player in the game by miles.

Disgusted every time I see KG in that green.

Whether who said what or all that garbage... I still feel like he turned on us.

One of the first things he said after he won that championship, "This is for 'Sota." He didn’t turn on us.

Garnett did not want to be traded, The FO had to convince him.

Manhandled by a two man team The high standard of defense that Rondo, Garnett, and Rivers demand must be admired. Say what you want about KG being a hack but he does not allow his teammates to be lazy on the defensive end ever

Well, it's still His house Not that KG ever needs motivation but we all know what be can do when he feels challenged.

Always the Big Ticket when he has a chip on his shoulder, and he usually does