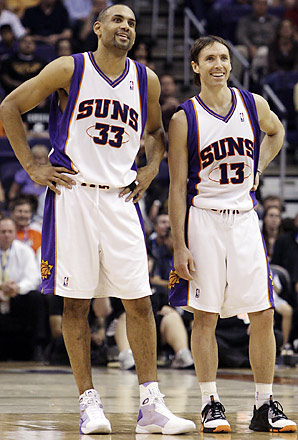 If you want to make an impact signing at a fraction of the cost of top tier free agents, the Celtics should offer the entire Phoenix Suns training staff 500% raises. Check this stuff out:


Over the years, many Phoenix Suns players have not been willing to immerse their bodies in a 50-degree ice bath in the name of recovery and recuperation.

Yet, every Suns player this season has subjected his body to a temperature of minus-274 degrees while standing dry in a padded chamber.

The Suns are freezing their players off the court so that they will move more freely on the court. Cryotherapy has entered the NBA vernacular, and the Suns are one of four teams to have a cryosauna in their facility for a chilling training approach.

The hyper-cold temperature shocks the body, sending it into "survival mode," Suns head athletic trainer AaRon Nelson said. The immune system prompts blood to rush away from the extremities to protect the vital organs in the player's core, where the blood is oxygen- and nutrient-enriched. Once the three minutes in the chamber ends, the body relaxes from the stress and sends the enriched blood to areas it is needed, such as fatigued muscles.

Talk about being ahead of the curve. The Suns training staff is like the Red Auerbach of training staffs. No wonder Steve Nash is still leading the league in assists and an all-star at the age of 38. Then you have the 39 year old Grant Hill, who was sidelined for essentially all of his prime years. He comes to Phoenix and has averaged 81 games played a year. They even kept Shaq's old fat ass on the court while he was there.

If the Celtics are smart, instead of giving some bum like Keyon Dooling a few million a year, they should earmark a fraction of that amount towards stealing the Suns medical staff. "And now for my greatest trick I will keep Jermaine O'Neal on the court for half of the Celtics games."