Rondo-Rubio I: Entertainment Put on Hold 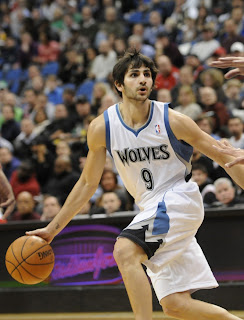 Once I started to realize that I might be able to afford tickets to the Garden this season, the question of which game to attend came up. I scoured the Celtics home schedule, however I wasn't seeking out LAL, MIA, CHI, or NYK. No, I was looking for something that no Boston fan has looked forward to since 2007: "MIN."

Why did I want to see the Minnesota Timberwolves?

As an admirer of the point guard position since my days of dropping dimes for Dr. Zammitti Orthodontics, I was looking for a chance to watch the two most innovative passers in the game.

The art of passing in the NBA has gone the way of the NFL's fullback, the MLB's suicide squeeze, and very nearly the Latin language. It is a game of fast breaks and isolations. Analysts marvel at the league's top players when they reach five or six assists, something that seems a bit pedestrian.

These two are bald eagles in professional basketball. One 50-point Derron Williams outing gets more fans salivating than the fact that Rajon Rondo has now gone 11 straight games with 10+ assists. He hasn't registered less than ten since before the Celtics big road trip. On top of that, a minimum of one or two of those dishes every game are spectacular to witness...

On a very inexperienced team out in Minnesota, Ricky Rubio had been averaging over eight assists per game in his rookie season. He managed double-digit dimes in 15 games this year including one astonishing behind the back pass to Kevin Love.

Unfortunately, due to the condensed schedule, Boston was robbed of a chance to see the T-Wolves come to town. We still had Friday, March 30th though, when Boston travelled out to the Target Center. We would be able to witness this event on television. Which brings me to the nit that needed picking.

Once again Kobe Bryant has stolen something special from Boston. Chalk up missing Rubio's showmanship and first battle with our own showman alongside the 2010 NBA Finals as things Kobe has ruined. On March 9th the Lakers were in Minnesota and trailing by one with under 20 seconds to go. Kobe received a handoff from Pau Gasol and trucked right through Rubio, tearing the young point guard's ACL and ending his season. That is why we won't get to see the first installment in the Rondo-Rubio show tomorrow. We are going to have to press the hold button for another year.

Entertainment is at a premium right now. Hollywood is still on a sub-Mendoza Line streak, and you can't watch television without getting a pounding headache from Lamar Odom's in-laws. This match-up would have been sheer entertainment, passing the Tivo Test with flying green and slate blue colors.

Whether these two players ever develop a rivalry or not isn't really the point. These two young innovators see the court on a completely different level than anyone else, maybe even since Maravich's floppy socks sagged on the hardwood. Their creativity alone, amidst a sea of spot-up threes and posterizing dunks, will be worth the price of admission.