KG has no love for his original franchise 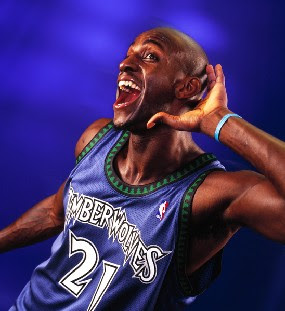 "As far as that franchise, I have nothing positive to say."

Ouch. Ok if you watch the video (after the jump) Kevin Garnett does point out that he's not calling out the Minnesota fans, but I never knew KG held this bitterness to the Wolves organization. I always thought they treated him very well. Kevin McHale drafted him high, they paid him ridiculous amounts of money (before there was a max ceiling) and when they were headed for a rebuilding phase they traded him (with his blessing) to a great franchise.

I feel like reporters who follow the Celtics are scared to ask KG tough questions, but where was anyone to follow up with, "Why the hate, KG?" Again this is new to me, and if the Celtics choose to rebuild this Summer I hope KG doesn't end up hating the Celtics as well.

Imagine if we trade Pierce (with his blessing) to the Clippers this Summer and then years later after he wins a title with them, he says he has nothing positive to say about the Celtics. Would sting huh?