Celtics not looking to add another big man 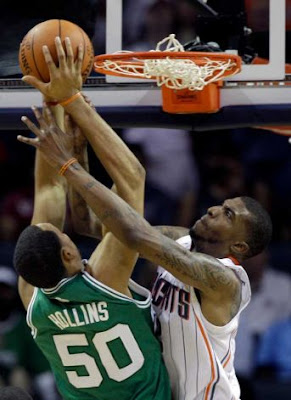 It was previously believed that the Celtics would replace their two big men out for the year, Jermaine O'Neal and Chris Wilcox, with two healthy big men. While the Celtics did sign Ryan Hollins after he cleared waivers, it appears that will be all for the Celtics acoording to Doc Rivers.


But Celtics coach Doc Rivers hinted Sunday that there's no players that were made available before Friday's playoff eligibility waiver deadline that currently interest the team. Which means the Celtics would likely only make a move for two reasons: 1) Emergency regular-season depth or 2) To add a player to the roster in order to have them part of the team during the summer workouts and get first crack at being a part of the team next year.

"We may add another guy just to get through the year," said Rivers. "But we'll see; there's no out there."

"Honestly, I'd be surprised if we brought a big in," said Rivers.


This is surprising to me because it's not like you can guarantee that Kevin Garnett, Brandon Bass, and Greg Stiemsma will all remain healthy throughout the playoffs. If just one missed a game, you become really thin up front. If two miss a game you're completely screwed. JaJuan Johnson is supposedly the insurance big man, but Doc recently speculated that he's not really sure if Johnson can even play the 4 or 5 in the NBA.

The only three reasons I can fathom to not add another big are 1) The Celtics will add another wing or guard (no smoke there), 2) Jermaine O'Neal holds some sort of sign and trade value next year (doubtful) or 3) the Celtics just don't want to pay another player and the ensuing luxury tax.

There must be at least one intriguing prospect in the D-League right?