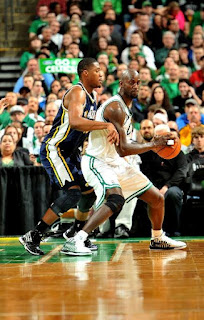 The Boston Celtics had a lead as high as 18 in the third quarter and while the Utah Jazz pulled within three in the fourth, Kevin Garnett's 23 points and 10 rebounds helped his team to hold on and win 94-82.

Gordon Hayward had an impressive game for the Jazz (27-24) - leading them with 19 points, seven rebounds and five assists. Al Jefferson had a double double with 18 points and 12 rebounds in his return to Boston.

Paul Pierce's 20 points and Brandon Bass' 19 helped carry the scoring load for Boston (28-22) along with KG. Rajon Rondo dished out 14 assists and Ray Allen sat out for the fourth straight game.

With the win, the Celtics again pull even with the Philadelphia 76ers for first place in the Atlantic Division after the Sixers beat the Cavs yesterday. Next, Boston will travel to Minnesota to take on Kevin Love and the Timberwolves this Friday at 8pm.