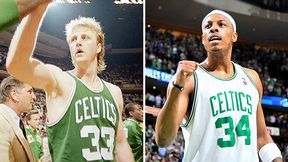 A three from Paul Pierce with 10:23 to go in the third quarter moved him past Larry Bird as the Boston Celtics' second all-time scorer. John Havlicek holds the all time Celtics record (26,395). Pierce received a well deserved standing ovation from the crowd at the TD Garden for reaching the milestone.

The Celtics pulled away from the Charlotte Bobcats in the fourth quarter, and never seemed to lose control of the game, winning 94-84. Boston's lead was as high as 18 and shot 50.6% from the floor. Kevin Garnett led the team with 22 points and seven rebounds. Pierce scored 15 points on the night and Rajon Rondo had a double double with 10 points and 14 assists.

The Celtics attempted 23 shots from beyond the arch, hitting only four of them.

Tonight was the first look the Celtics have had at rookie Kemba Walker, who scored 16 points, adding seven assists. Reggie Williams led Charlotte with 21 points. Derrick Brown was 10-of-10 from the floor off the bench, scoring 20 points.

The Celtics improve to 14-10 while the Bobcats will fall to 3-22. Boston gets to rest tomorrow in preparation for a showdown with the Lakers this Thursday night at the TD Garden.