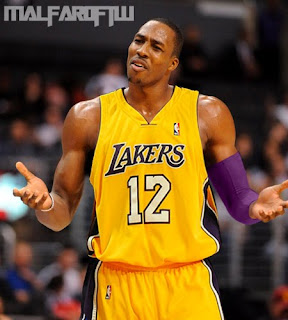 The Magic wanted to hold onto Dwight Howard through their hosting of tonight's all-star game. It didn't take long afterwards for the rumors to start swirling, but the Magic are denying that a trade is imminent.

Orlando Magic continue to say they have made no decisions about what they'll do with Dwight Howard as the NBA trade deadline approaches on March 15.

And they are saying that a rumor making its way around Orlando that they've reached a deal with the Los Angeles Lakers and a third team is totally false.

The scuttlebutt is that the Magic would send Howard, Hedo Turkoglu and Jameer Nelson to the Lakers and the Magic would receive Andrew Bynum and Pau Gasol. A third team, the Toronto Raptors, could be part of the deal or in a separate trade with the Magic, sending point guard José Calderon to Orlando.

The Magic reportedly have no interest in a Bynum for Howard swap. They want Gasol as well. The Lakers aren't willing to trade both big men for Howard. Not sure if Jameer is enough to change their mind. Assuming that this rumor is false, these are the odds I put for Howard by the end of March 15. 33.3% he stays in Orlando. 33.3% chance he's traded to the Nets in a trade revolving around Brook Lopez and MarShon Brooks, and 33.3% he becomes a Laker. If he stays with Orlando through the season I think it then becomes a battle between the Nets and Mavs for the Howard/Deron Williams duo, with the Lakers a dark horse.

Any chance Howard becomes a Celtic? This is the only way I see that happening: Pierce and Rondo are traded for players that Deron and Howard want to play with AND at the same time both the Nets and the Mavs screw up free agency, while Danny and Doc make the best pitch. So basically I'm saying the Celtics have about a 2% chance if Howard becomes a free agent and 0% if he's traded before the deadline.

Getting back to the above rumored trade that the Magic denied. Does it improve the Lakers or are they giving up too much?