Celtics to be without Bass for 2 weeks 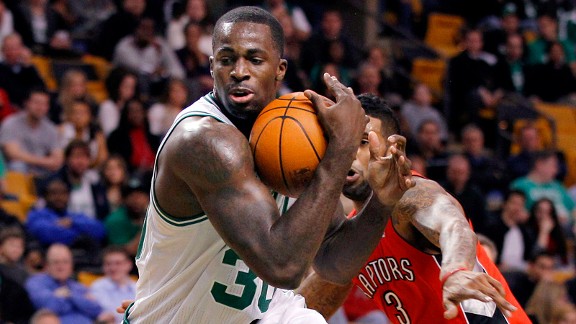 
The Celtics will be without Brandon Bass for the next 10 to 14 days because of knee inflammation.

Bass felt soreness after Boston’s loss in Toronto on Friday night and Doc Rivers learned the extent of the injury on Sunday morning when he received a call from doctor Ed Lacerte. Bass missed the Feb. 5th game against Memphis because of issues with his right knee felt against New York on Feb. 3rd.

“We knew the knee was bothering him, but then he got the treatment, and he missed that one game,” Rivers said. “There was nothing said after the Toronto game. Then Eddie called me this morning and told me he was out, and out for a while. That was a surprise.”

Tough blow for the Celtics as Bass has easily been the Celtics most productive reserve this season. The Celtics will have to rely on Chris Wilcox and JaJuan Johnson more in his absence. Both players add athleticism to the Celtics 2nd unit, but both also have had trouble picking up all the plays. Hopefully these next two weeks of playing time will do the trick.

It appears that the Celtics won't ever have their full team this season. I guess that's just the way things go with a lockout and an older team. As always, I hope Bass isn't rushed back. Our best chance to steal #18 this spring is to go into the playoffs healthy and hungry.