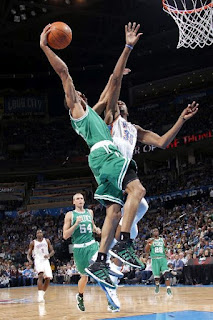 While most Celtics fans probably shut their TVs off after their team let an early 10 point first quarter lead turn into a 27 point deficit against the Oklahoma City Thunder, the Celtics were busy rallying to pull within six points late in the fourth before falling on the road 119-104.

The Thunder scored 72 points in the first half and were annihilating Boston from three-point range, at one point shooting 8-of-12 from behind the arch. They built their lead up to 27 in the second half and it looked as if Boston would never pull close -- until the Celtics knocked that down to 14 at the end of the third. Boston built on their strong close to the third with a 16-4 run in the fourth quarter that helped them to nearly steal one from Oklahoma City. Six points from Kevin Durant in the final 3 and half minutes helped stave off the Celtics rally.

Garnett returned for the Celtics with a double double -- 23 points and 13 rebounds. Paul Pierce scored 23 with eight assists and Ray Allen had 21 (3-of-5 from three-point range). Avery Bradley played very solid in a starting role, with 12 points and 3 blocked shots. Jermaine O'Neal and Chris Wilcox missed the game with injuries and Rajon Rondo was out while serving the last of his two-game suspension. The Celtics bench scored only 9 points.

Russell Westbrook and Durant led the scoring for the Thunder with 31 and 28 points respectively. James Harden added 17 while Kendrick Perkins scored eight points and grabbed 10 rebounds.

The Celtics will head into the All Star break on a five game losing streak, matching their longest losing streak of the season. Their last win came on February 12th against the Rose-less Chicago Bulls.