Celtics bite the Grizzlies, improve to 13-10 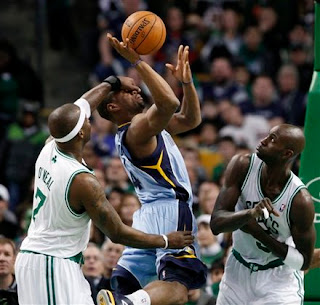 The Boston Celtics destroyed the Memphis Grizzlies with a score of 98-80 . The Celtics dominated the game with impressive performances by Kevin Garnett (24 points, 9 rebounds), Rajon Rondo (14 assists) and Paul Pierce (21 points).
The refreshing good news for the Celtics was the play of rookie JaJuan Johnson, who looked very solid in 22 minutes of action (10 points, 4 rebounds). The Celtics also got some help from the bench by Chris Wilcox (12 points, 5 rebounds in just 11 minutes). Both Johnson and Wilcox successfully provided some instant punch from the bench when the team most needed it with Brandon Bass out for this game due to some knee problem.
The atmosphere at the was obviously affected by the upcoming Super Bowl event. The game started at and both teams started out cold. Kevin Garnett was the most active player from the start, being aggressive at both ends of the floor, scoring 4 points in a very short stretch. Rondo slowly got into the game and delivered some valuable passes to KG and Chris Wilcox, who entered in the game with a chip on his shoulder. The ball felt safer in Rondo’s hands (4 assists) than in Pierce’s (2 turnovers), who started the game ice cold, though at least he got involved early, unlike an invisible Ray Allen (0 points, two shots in the quarter). Nevertheless, Pierce delivered a nice assist on an active JaJuan Johnson for his first points in the game. 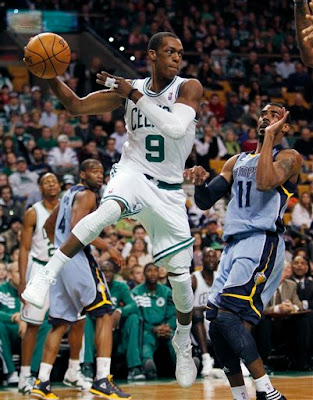 The Celtics were a stronger team in this quarter, ending with an eight point lead by the end of the first period (24-16). Wilcox played great, delivering 10 points and 4 rebounds in six minutes for the green.
The team sleep walked again for the beginning of the second period. Three consecutive turnovers by Bradley, Garnett and Rondo made it possible for the Grizzlies to get closer to the Celtics (26-24).
The Grizzlies got the first lead with 8 min to play after another Allen miss. Ray and Paul combined for a poor 1-10 shooting display. Doc Rivers was forced to call a timeout following an offensive draught that allowed to get a 16-3 partial that got the a 5 point lead (32-27)
Boston woke up after the timeout, netting a 16-2 score that gave them back the lead thanks to a very good defensive effort  and the awakening of Paul Pierce thanks to an immense Rajon Rondo who became the floor general again for the Celtics (10 assists by halftime).
The ball moves so much better with Rajon on the court.
The game reached halftime with the Celtics leading by eight points (43-35).
The Celtics dominated the tempo of the match, displaying the same kind of game that has made this team successful in the last five years: that is above average team defense and unselfish ball movement on the offensive end. The Grizzlies only managed to net 37 % of their FG’s in the first half and they lost the battle under the glass to the Celtics (18-25).
For Boston Rajon Rondo (10 assists, 2 steals), Chris Wilcox (who surprisingly didn’t enter the game on the second period), Paul Pierce and Kevin Garnett (9 points apiece) were the most inspired players. 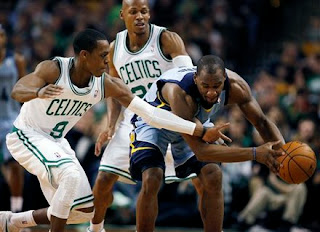 The Celtics continued showing the same positive signs with the start of the second half. The defense continued to bore the Grizzlies and Kevin Garnett was again the best player on the court. He scored 5 points, including a three pointer after a great offensive rebound by Jermaine O’Neal. Ray Allen finally woke up this Sunday, netting two three pointers to help the team get an 11 point lead with 6 minutes remain on the quarter(45-56). Also a good sign was Marc Gasol’s 4th foul after hitting Paul Pierce under the rim following a great pass by KG.
The team's outside shots began falling in soon after that one, with Pietrus and Allen getting one apiece after the Grizzlies timeout to try and stop the bleeding. Rookie JaJuan Johnson continued to look solid out there and Wilcox returned to the game showing signs that he may have finally found his spot in the team.
The quarter ended with a failed alley up attempt by Rondo to a wild JaJuan Johnson jump and a great dunk by Garnett following a fabulous inside pass by the Celtics rookie from Perdue.
For the Grizzlies, Rudy Gay (18 points) tried in vain to get his team closer to the Celtics by the end of the quarter. The Celtics lead the Grizzlies by eight points for the start of the final period (69-61)
A great basket by Garnett kept the Celtics rolling in the forth. No one could stop KG under the glass, particularly with Gasol in foul trouble. Mickael Pietrus was left open as a result of this and he scored his second three pointer right ahead.
Avery Bradley delivered a great play seconds after, again asphyxiating the opponent’s guard and stealing a ball to later assist JaJuan Johnson for another dunk. The C’s got a 13 point lead with 9 minutes left (76-63).
Pierce entered back and delivered a beautiful unbalanced basket and a fall away jumper seconds after. Kevin Garnett continued to dominate the glass and the Celtics continued to look impressive by the end of the game (88-70 with 5 minutes remaining in the game). Garnett looked fresh and strong out there for the whole game. He and Paul Pierce combined for 45 points and 15 rebounds and they finally got some rest with 3 minutes remaining in the game leaving the team with a 21 point lead (94-73). Pierce is currently 9 points behind Larry Bird in the Celtics all time scoring list.
The Celtics ended the game with the three rookies on the floor and delivered a clear message to the league: Celtics basketball is back.


Boston has won 8 of the last 9 games and will look to improve their 13-10 record on Tuesday against Charlotte. 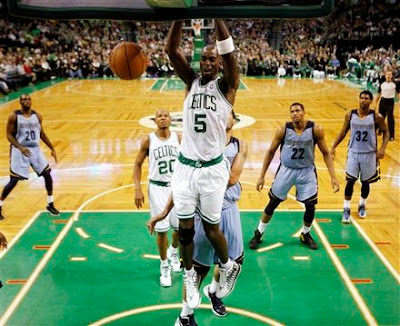