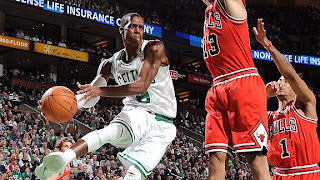 With Derrick Rose out with back problems, the (14-12) Celtics were looking to overwhelm the  (23-6) Chicago Bulls this afternoon. This afternoon, the key for the Celtics is the play of Paul Pierce. His scoring numbers have been down this season, but he's come up big every time Boston has needed it thus far. Since Derrick Rose is out, the play of CJ Watson, the backup point guard is pivotal. Chris Wilcox got the start in J-O'Neals spot.

Rondo started the game hot, on 2 fast break buckets, a jumpshot, and a quick drive to the hoop, quickly collecting 8 points. After a great defensive play, and an unselfish pass from Rondo, Chris Wilcox capped off a fantastic fast break with an emphatic slam, bringing the lead to 11, and prompting a standing ovation. The first quarter ended with Boston on top 28-23. Joakim Noah led the way for the bulls with 10 points and 3 rebounds while rondo had 11 points and 2 assists.


Pros and Cons of the first half

Cons:
- Were out-rebounded by the Bulls (28-21)
- Not boxing out Joakim Noah & Boozer effectively, leading to 2nd chance buckets
- Bulls were still within striking distance

Boston started the third quarter with their starters, and :45 seconds in, Rajon Rondo scored another fast break bucket. Despite some continuedthe status quo fantastic play from Rondo, Chicago managed to stay within 3 of the Celtics for a good portion of the quarter. Carlos Boozer picked it up offensively adding 8 points (16 points total). With 8 seconds remaining, Rondo went to the line for his 8th and 9th free throws of the game. It's a fantastic sign when he gets to the line that much. The third quarter ended with the Rajon Rondo show continuing (28 points, 6 rebounds, 9 assists).

The fourth quarter started with the Celtics in the lead by six but was quickly cut to four after a Taj Gibson jumpshot. Ray Allen hit a big 3 pointer, then followed up with a small 8 foot jumper, which put them up by 9. Two possessions later, Paul Pierce hit a huge 3 pointer to bring the lead to 11 for the second time. To add to the great play, Rondo facilitated two back to back alley oops that brought the lead to 14, and gave Boston some breathing room. JuJuan Johnson was definitely ready for the time Doc Rivers gave him, with a season high 12 points and a season high 33 minutes. Chicago somehow managed to work their way back into the game, and they cut the lead to 3 with 1:45 remaining in the game. Paul Pierce turned the ball over with 27 seconds to go, and the Bulls used their final timeout to regroup. CJ Watson took a long fade-away 3 pointer and missed terribly, which gave Boston the ball back. With 20 seconds remaining, Rajon Rondo hit two clutch free throws to make it a 2 possession game.