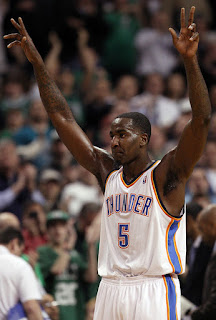 The Celtics lost their fifth straight game tonight, this time falling to the Thunder 97-88. It was Kendrick Perkins' first return to the Garden since being traded last February. Boston had made the game close at several points in the second half, however in the end they could not finish the deal.

Paul Pierce led the team with 24 points. Rajon Rondo had 12 points and nine assists. Boston shot only 39.1% on the night.

The Thunder were led by, no big surprise, Kevin Durant and Russell Westbrook with 28 and 26 points respectively. Perkins had seven points and five rebounds.

The Celtics fall to 4-8 and are amidst the largest losing streak of the new big three era.