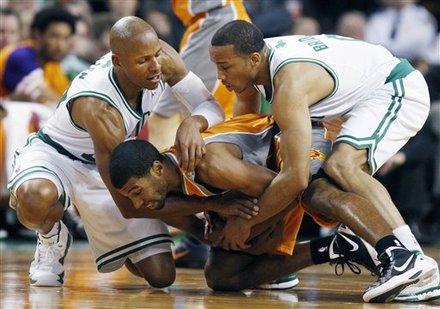 Rajon Rondo sat in his first game of the season due to the right wrist injury he suffered against Toronto.  Luckily it is only a sprain but we got a chance to see Avery Bradley start in his first NBA game ever.  Although Bradley played well, it was not enough for the Celtics to beat the Phoenix Suns, as they lost 79-71 which is a season low for the Celtics.

The first quarter belonged to Marcin Gortat as he led all scorers with 14 points on 7/11 shooting.  Boston’s inability to stop the big man in the paint has them down 20-15.  Boston showed us why they are one of the worst first quarter teams in the league, only team they are better than is New Jersey.  Avery Bradley did a fantastic job on Steve Nash in the first while playing well offensively too.  Bradley has filled up the stat sheet in one quarter very nicely with 4 points, 2 rebounds, 1 assist and 1 steal.  For all the good Bradley had at the end of the quarter, E’Twaun Moore threw it all away in the final minute with two turnovers in one minute.  Phoenix is outplaying the Celtics in rebounds (13-10) and points in the paint (14-8).

Boston fixed nothing in the second quarter as the Phoenix Suns pushed their lead to 11 points with a 46-35 lead at the half.  The Celtics continue to struggle offensively, playing very lackadaisical.  They will not win many game settling for jump shots, which in turns prevents free throws.  Boston only have taken two free throws thus far in this game.   The effect of no Rajon Rondo has been evidently poor because Boston struggles to set up an offensive rhythm.

To start the second quarter, Doc went with a line up of Moore, Pietrus, Daniels, Bass and Garnett, which resulted in zero field goal attempts within 10 feet of the basket.  The Phoenix Suns are shooting an incredible 50 % in the first half but thankfully to the slow paced Celtics, Phoenix is well below their season average of shot attempts.  The Suns are 5-0 when leading at half time, not encouraging for the Celtics.

The third quarter has always been the Celtics quarter and tonight was no different.  They pushed early to start the second half resulting in a 12-2 run and eventually taking the lead on a Mickael Pietrus three pointer. Unforunately, when Avery Bradley went to the bench, the Suns made a run to take a lead into the final quarter with the score 60-55.  Boston’s turnovers late in the quarter prevented them from holding onto the lead.  The most interesting statistic for this game is no Celtic has over 4 made field goals in this game through three quarters.

Falling into bad habits in the fourth quarter plagued the Celtics.  A very sloppy quarter for both teams as a combined 20 points has been scored in the first ten minutes of the fourth quarter.  Boston spent most of the time offensively standing around showing signs that they desperately need Rajon Rondo to run this offense.  Phoenix got comfortable swinging the ball around the perimeter to find the open man for three.  Many of these possessions resulted in a Celtic defender scrambling to contest the shot.   Phoenix has always played the Celtics well, who have now won 4 of the last 5 games against these Celtics. 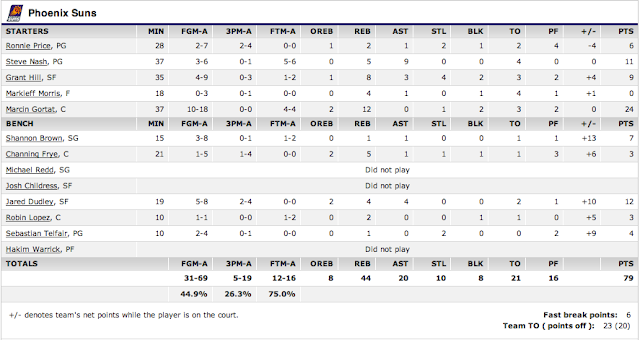 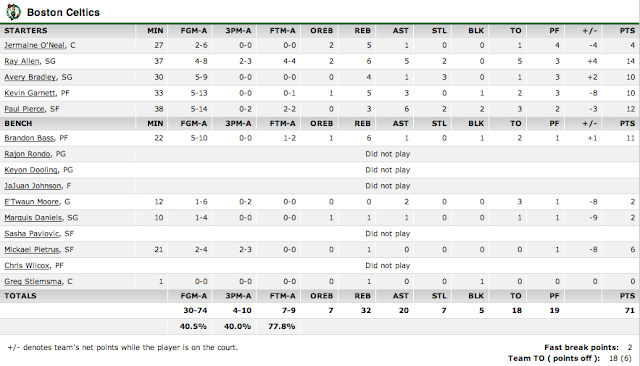