What the Hell Happened to...Joe Wolf? 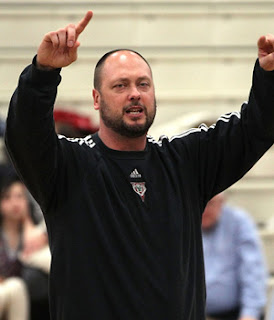 For just the second time in our What the Hell Happened To segment, we feature a player who sported a mullet (Dwayne Schintzius was the first).  As a fellow-Tarheel, Michael Jordan wanted him.  The hell with Jerry Krause and picking Horace Grant, why didn't you pick Wolf?  Perhaps it was a preview of MJ's ineptness as a future general manager, but it's true: Michael Jordan wanted Joe Wolf to be selected over Horace Grant in the 1987 Draft.  The Bulls didn't listen and opted for Grant at pick #10.  Wolf slid to the 13th pick, selected by the Clippers.  We all know who had the better career.  Let's watch draft night and the Wolf pick:


Is it me or is it actually unusual watching an NBA draft without Stuart Scott saying "Jay Bilas, tell us what you know about him"?

Wolf's career went a similar path as that of Mark Bryant in that his longest stint with any team was his first team, and then he became a journeyman.  [This trend makes sense; the team that drafts a guy gives him several years to see if he pans out and can play.  What's that you say?  Billups and Johnson?  Oh right, unless your Chauncey Billups and Joe Johnson and this asshole is your general manager.]   He spent his first 3 seasons with the Clippers before movin onto Denver for 2 years.  He'd be released by  the Nuggets in September of 92 and signed with the Celtics in early October.

I don't recall either of the 2 games Joe played for the Celtics.  He wore #42 and in the two games played 9 minutes.  0-1 from the field, 1-2 from the foul line, 3 rebounds, 2 turnovers, 2 fouls.  Joe Wolf's career as a Celtic was over although a part of me vaguely recalls him showing up on a Celtics summer league team in '92 or '93 at the Westchester County Center in NY.

His NBA career wasn't over however.  He'd go on to play for the Blazers, the Hornets, the Magic, Bucks, back to the Nuggets and back with the Hornets, where he remained until 1999.

Time to flash back to Zander Hollander's Complete Pro Basketball Scouting Reports, everything a young adolescent who doesn't get to watch games all over the country needs to assess how good or bad a guy is:


Working his way back...Cartilage damage in his right knee wiped out half his rookie season and last year was still not at full strength...Needs to improve his shot and become more aggressive on the boards...His soft touch and confidence at long distance seemed a bonus in a player his size at North Carolina where he had shot .571 and averaged 15.2 ppg as a senior for Dean Smith...But he can't shoot over people as easily in the pros and still seems reluctant to power the ball to the hoop...Will never do anything spectacular but could still be a key reserve on a good team...Comes from a ballplaying family...Brother Jim played on some great Penn teams at Penn in the 1970s...Brother John and Jeff also played in college. 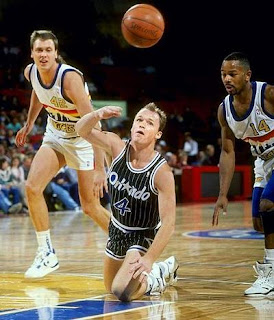 One line really sticks out there for me, and it's the one I bolded.  Had I written this for Joe Wolf early on in his career, I would've thought the same possibilities.  It's tough to put a finger on Wolf's game.  I certainly saw him play enough to come to my own conclusions.  Sometimes I thought he was the max of what Tyler Hansborough would become.  Other times, I thought he was closer to Pete Chilcutt.  Or maybe about the same as JR Reid.  He played 11 NBA seasons and appeared in just 14 playoff  games, so maybe he was unlucky and never caught the right team or system to be a part of.  He was a pretty average, run-of-the-mill player.  But a guy that sticks around that long has to have something going for him.

Like Greg Minor and Jay Humphries, Joe was involved in the D-League a few years ago as the head coach for the Colorado 14ers.  This past season Joe was an assistant coach for the Bucks.  He lives in Wisconsin with his wife Jill.