Jeff Green Wants to Remain a Celtic, Show Boston What He's Got 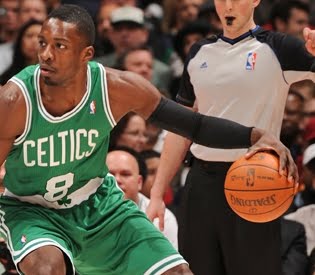 When you look at the numbers, Green had decent production after coming over from Oklahoma City in the Kendrick Perkins trade. But when it was suggested his performance may not have lived up to his own standard, he interjected a hearty, “Hell, no.”
There is more to Jeff Green than met the eyes of Celtics fans in the last few months of the 2010-11 season.
“Yeah, man, you know a lot of people don’t know what I can really do,” he said. “In Oklahoma, I was kind of overshadowed by Kevin (Durant) and the way Russell (Westbrook) picked up, but, excuse my language, I can really (expletive) play. I can really play this game, man.”
“I had some good meetings with coach Doc Rivers before the lockout, and I’ve been talking to Paul Pierce and Ray Allen,” Green said. “Next year they’re really going to allow me to play, and I think that’s what I need. I need to go out there and just play. Sometimes I think too much, but I just need to go out there and play the game. I’ve got great confidence in myself, but things were a little difficult last year.”


I'm not sure I would label Green's production last year on the Celtics "decent, " unless by decent you mean not that good. There's a reason why Green was dubbed the "Invisible Man" and "Butterfingers Green" in our Shout Box. He seemed like the quintessential round peg in the square hole in terms of fitting in with the Celtics unit. Doc had to simplify the play book for the playoffs and the Celtics were eliminated early.

With all that said, Green deserves a shot to show us what's he got. While I'm worried Danny Ainge will overpay Green in an attempt to save face on the trade, if Green does return I'm hoping for a breakout year. We'll never get back the #1 seed that was blown or the lost shot at the title last season, but Green wasn't the one who made the trade, so he doesn't deserve to have the 2011 postseason on his head. Moving forward if Green takes a leap in his game the C's future will look much brighter.