What the Hell Happened to...Gary Phillips? 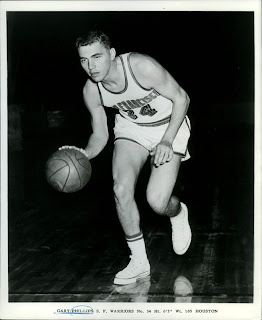 This week in What the Hell Happened To, we go back to the 1960s and remember 6'3 guard, Gary Phillips.  After a sensational high school career in Quincy, Ill., he played for Guy Lewis at the University of Houston. A 6-foot-3 guard, Phillips quickly established a reputation as rugged defender. In his sophomore season, Phillips held University of Cincinnati All-American Oscar Robertson, who averaged 35.1 points per game, to 13 points, the lowest total of the Big O’s collegiate career.

As a senior, Phillips led the Cougars to a berth in the 1961 NCAA tournament and was named as a first team All-American.

Phillips was taken by Boston in the 1st round of the '61 NBA draft with the 8th overall selection. However getting picked by the defending champs wasn't what Phillips was hoping for:

“Growing up in Southern Illinois, I was a St. Louis Hawks fan,” Phillips said. “I thought they were going to take me with the seventh pick, but they took Cleo Hill instead.  I was disappointed but I guess getting drafted by the Boston Celtics was a pretty good consolation prize.”

The Celtics would win the title and for Phillips, "being a part of that championship team is my greatest basketball memory."  However his time in Boston was about to end:

“In the draft following my rookie year, I had a bad training camp,” he sad. “The Celtics had just drafted John Havlicek out of Ohio State. Auerbach called me into his office and told me that Havlicek would be getting most of the playing time. He told me I could play in this league and he would trade me wherever I wanted to go. I wanted to go to the West Coast so I asked to be traded to either the Lakers or the Warriors, who had just relocated to San Francisco. 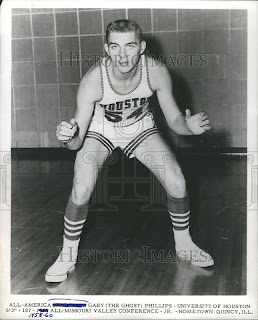 The Celtics decided to sell Phillips to the Warriors where he would play for four years. His teammates in San Francisco included Wilt Chamberlain, Nate Thurmond and Rick Barry. During this time, Phillips returned to the Finals in 1964. San Francisco would lose the series to the Celtics, 4-1.  Phillips believes Chamberlain is the greatest player in the history of the NBA.

Phillips retired after the 1966 season after averaging close to 7 ppg in 20 minutes a night.  He returned to Houston where he was (not surprisingly) involved in selling real estate with his family.  In 1999, Phillips was named as one of the University of Houston’s top 30 athletes of the 20th century.
Today Gary lives in Hunt, TX with his wife Judy, where they have resided for the past 19 years.  He owns 3-H Storage, a self-storage facility in Kerrville, TX.  Although him and Xavier McDaniel each have a business page on Manta.com, their perception of today's players is a bit different:

“They take better care of themselves now and they have better training,” he said. “They are not necessarily more talented than they were in my day, but they are better prepared.  These players are not as fundamentally sound as we were. In my day, there were only a few players that dribbled behind their back. Now everyone does it.”

He has great admiration for the San Antonio Spurs:


"They are, without a doubt, the most fundamentally sound team in the league. Their commitment to defense is what sets them apart. Your offense will always fluctuate up and down, but your defensive effort should remain constant. That is how you win championships.  Popovich is very disciplined coach, probably due to his military background. He runs the whole show,. What they have established now is just a continuation of what David Robinson and Avery Johnson started.”

“If I was going to build a franchise, he would be the first player I took. He just goes about his business and ends up with a double-double every night. Basketball is about winning championships and he has proven he can get there.”

Phillips also has praise for the other members of the Spurs:

“(Manu) Ginobili is a fighter. He is deceptively quick and will do whatever it takes to win,” Phillips said. “(Tony) Parker is really quick as well and is one of the top five point guards in the league.  But what I really like about the Spurs is their bench. They can go four or five deep and they are all great shooters. This is a team that understands what each individual’s contribution should be. That is the foundation of every championship team.”

Sounds to me Gary has become a Spurs' fan in his old age :-)