What the Hell Happened to...Dennis Awtrey? 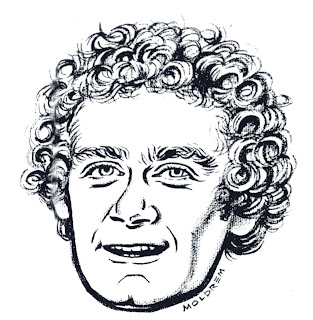 In a 1977 Sports Illustrated article, he was described as either "qualifying for the Enforcers Hall of Fame or a padded cell."  He was the guy that Bill Simmons was quoted as saying in The Book of Basketball that was "able to last 10 years in the league because he decked Kareem."  Well he actually lasted 12 seasons, including a very short stint with the C's in 1979.  Long before Santa Clara produced Steve Nash and Marlon Garnett, there was Dennis Awtrey.

Dennis was drafted in the 3rd round of the 1970 draft by the 76ers.  He'd play for the Sixers and Bulls before being drafted by the New Orleans Jazz in the expansion draft in 1974.  However before playing for the Jazz he was moved to Phoenix.  He'd have his longest consecutive tenure for one team in playing for the Suns from 1975-1978.  He even took part in the Suns trip to the Finals in 1976 including the famous Triple OT game. 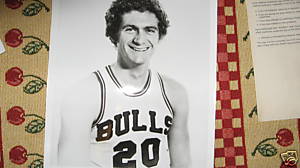 In October of 1978 he'd arrive in Boston, traded for a second round pick.  By January of 1979, Boston moved him, to Seattle for a first round pick. [Ah the beauty of the NBA gm's back then: traded for a second round pick and three months later, after averaging 2 points and 2 rebounds in 10 minutes a night for 23 games with the C's, and Red is able to parlay him into a first round pick for the next year's draft.]  Fortunately for Dennis, he'd stick with Seattle the rest of that year and win an NBA title with the Sonics in 1979.

He'd be waived by Seattle after the season, only to end up back on them in 2 years, after a second stint with the Bulls.  He'd finish off his career with the Blazers in 1982. 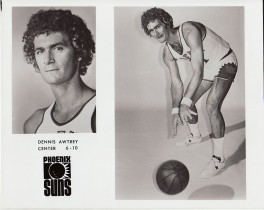 Awtrey's career stats aren't mind-blowing: 5 points and 4.5 rebounds in 19 minutes a night.  I was going to take Simmons' opinion on him in that a big reason he lasted as long as he did was because of the Kareem altercation.  But then I decided to watch Game 5 of the 1976 Championship between the Celtics and Suns.  Watching Awtrey, really reminded me of Anderson Varejeao.  He's a legit big man and while only seeing him play one game doesn't make me an expert on him, the comparison to Varejeao seemed obvious.  A tall, annoying guy with annoying hair.  Awtrey was fundamentally sound but I'd give Vareajeao the edge overall.
Remember before the drama in Detroit back in November of 2004 with the Pistons and Pacers and Stephen Jackson and Ron Artest going insane, the NBA actually tolerated fights.  It wasn't condoned and rightful suspensions were given, and certainly not encouraged like hockey, but when it happened, it happened.  The NBA was a major contact sport being played at the highest of levels and guys like Awtrey found their niche.  An enforcer's job has always been to keep things in order on the court, in whatever way works best for his team. If an opponent is taking liberties with a teammate, the enforcer sends him a message. Sometimes a glance is all it takes, sometimes a word or two, sometimes an elbow or an extra-hard pick. But if the opponent sends back a message of his own—"Are you talkin' to me?"—stronger measures would be called for.  The Celtics had a top-notch one of these in Kendrick Perkins recently and it was clear just how much he was and still is missed.  As Hall of Famer Jack Ramsey once said "You need a rugged, we're-not-going-to-take-any-nonsense personality on a team.  It's important for your team to let it be known that you will not be pushed around, will not be intimidated."  Dr. Jack knew first-hand when he had Maurice Lucas on his team.
Dennis expounded on his own perception of being labeled a tough guy, despite SI saying he had "the demeanor of a puppy off the court":

"I'm physical, so I expect to get some abuse back," Awtrey says. "But no one ever challenged me until I got into the pros. Not in college, not in a bar. Nothing. I thought I was a peaceful person. I see good and bad in terms of black and white. When I started getting pushed around, I decided not to take it. I guess I got my reputation when I punched Kareem in the face four years ago on national TV. Lanier? I don't know. I don't think he's that tough. Two years ago I threw Burleson into the stands in Seattle. Pat Riley and Fred Brown—just a couple of little guys—were tussling around on the floor. I was just watching. Then Burleson attacked Riley. I threw Tommy into the seats, on top of a lady. She almost had a heart attack. Dawkins really scares me because I don't know what's going through his mind. Cowens loses all sight of himself—and everything else. A guy like him is not so unusual in the NFL, but in the NBA he is an oddity." 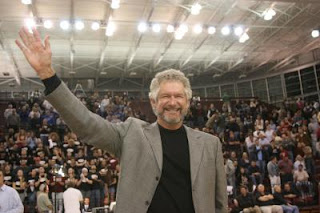 Dennis has a daughter Trista and son David.  He held an array of jobs after basketball, including representing a golf equipment manufacturer and selling commercial real estate (an incredible amount of WTHHT players have gotten into selling real estate in their post-playing career).

"But I never found something I couldn't truly do without," he said, "so I decided to try high school coaching and teaching, 30 years after I left high school. I had to get a teaching certificate, and the job was hard work. I got to the point where I was saying to myself, 'I really don't have to do this -- do I still want to do it?' It was so demanding that I wasn't doing anything else I wanted to do."

So he retired, and in April of 2001, he married his second wife, Peggy.  They reside in Phoenix, AZ.