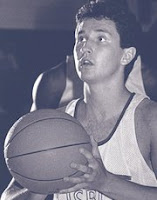 The final selection that year belonged to the Boston Celtics. With the 228th pick, they chose Dan Trant, a native of Ireland who graduated from Westfield High School and Clark University in Massachusetts.
Trant never suited up for the Celtics. He never won an NBA championship or achieved a Hall of Fame career like others in his draft class. But on September 11, Trant will be recognized for another reason -- he was one of thousands killed in the World Trade Center attacks.

Of course we remember all the victims on the 10th anniversary of 9/11. And we remain thankful to all the first responders.
Also check out tb727's My September 11th. It was written two years ago, but obviously still relevant.