What the Hell Happened to...Kenny Sailors? 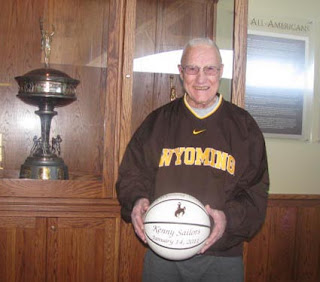 We know Dr. James Naismith invented basketball.  We know Jerry West is the logo of the NBA.  And we all know the Celtics are the best team in NBA history.  But this week in WTHHT, we look back on a guy who practically invented the jump shot.  Let's roll the clock way back, to 1943, where we remember a 5'10 point guard who burst onto the scene, Kenny Sailors.

Kenny was named MVP of the 1943 NCAA tournament and graduated from the University of Wyoming.  After a stint in the U.S. Marines, he returned to UW to play out a final year of eligibility. (UW says he won player of the year honors in 1946.) 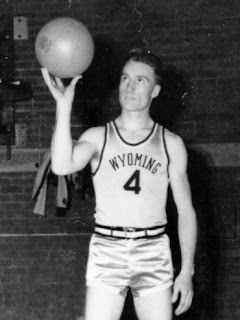 He was drafted by the Chicago Stags in the 1947 BAA dispersal draft, from the Cleveland Rebels (I have no idea who the hell they were).  In his rookie season he finished 9th in the league in FG Shooting%, at a blistering 30%.  That's not a typo (what was wrong with players back then that caused them to shoot so poorly?  I know the game was played at a more breakneck style but only .309 from the field?  That's a good batting average in baseball.  In all seriousness I think the goal back then was the more shots up, the better chance you have to score.  Cue Paul Westhead).

In November of 1947 Kenny was sold from the Stags to the Philadelphia Warriors.  Just a month later he was sold from the Warriors to the Providence Steam Rollers (too bad Marvin Barnes couldn't have played for them, since they were from his hometown of Providence, and well the "Roller" part...).  Then in July of 1949 he'd sign with the Denver Nuggets as a free agent.  [Tangent time: did anyone know the 1950 Denver Nuggets actually existed??  Well they did, although as you can see, is not linked to today's Nuggets.  Wonder what those guys would've thought about all the Nuggets' players' tattoos today...] 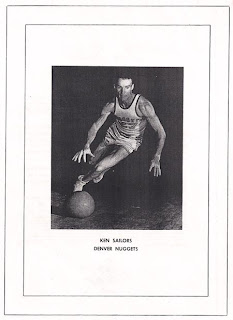 In 1950 he was sold by the Nuggets to the Celtics.  He only played 10 games for the Celtics, wearing #13.  He shot 4-25 in his time with the Celtics (even Larry Robinson in his one contest was 1-5).  Soon after he'd be traded by the Celtics along with Brady Walker for Dick Mehen.

That ended his pro career and as a whole, Kenny actually put up some very solid numbers for his career.  A 12.6 ppg average.

He is widely known as being one of the inventors of the jumpshot.  While growing up, he and his older, 6’ 4” brother would mess around shooting baskets into a hoop attached to a windmill after finishing their ranching chores.


“The only way I could make a basket was to jump and shoot it over his head.  No one really knows who took the first jump shot. But I worked at developing the shot and made it the shot that players still use today,” he said.

Players of his day usually stood flat footed and shot the ball with two hands. Sailors’ technique called for dribbling toward the basket, elevating an estimated 36 inches off the ground (he could jump!), freezing in the air while squaring the body and cocking the elbows, then releasing the ball with a flick of the wrist.


“Nobody could block it,” he recalls with pride. And it almost always went in.

After he hung up his sneakers at the end of his pro career, Sailors and his late wife, Marilynne, moved to Alaska with their three children where they lived for 33 years. They worked as hunting outfitters, and he coached girls’ high school basketball. When Marilynne became ill, the family moved to Idaho. Her death marked the end of a 60-year marriage. Sailors returned to Laramie, WY and rented an apartment in the shadow of the Arena-Auditorium, where the Cowboy basketball team now plays. 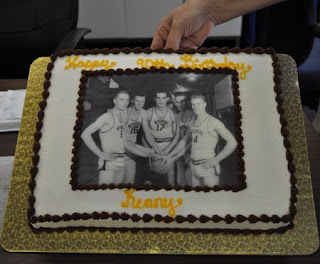 That is a convenient location for Sailors, who can walk across his parking lot to watch Cowboy basketball games and practices. He sits not far from where the oversized version of his now-retired No. 4 jersey hangs from the rafters.   He's pretty confident the NBA remembers him, even though he just turned 90.


“It’ll (the Hall of Fame contacting) happen some day,” he says. “It didn’t help me going to Alaska for 33 years where no one could find me. It doesn’t matter though. I belong to the greatest Hall of Fame that any man or woman could belong to. It’s not down here, it’s up there,” pointing toward the sky. “It only has one person on the selection committee, and that’s Jesus Christ!”

Today Kenny even has his own website.  By the looks of it, it's a lot more aesthetically pleasing than the Zan Tabak Skills Camp website.