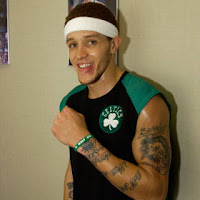 ESPN caught up with Delonte West in Washington DC over the weekend, where he was assistant coaching the Goodman League team during a game against Los Angeles' Drew League. Delonte now has a new job in mind to keep him busy during the lockout. Apparently he plans on selling knives at Sam's Club or BJ's in addition to working at the Home Depot.


“I actually might have work with Sam’s [Club], BJ’s, selling knives,” West said. “That’s pretty cool too. I get a microphone and everything.”

West’s down-to-earth approach to lockout employment is also reflected in his attitude toward the summer league games, which he saw as a chance for NBA players to connect with the fan base.

West said he hadn’t heard back yet on his “average American” job application, but he was looking forward to potential employee perks at Home Depot, should the lockout extend into the season.

“You gotta get with it, do something that you love,” he said. “I’m an architect, I was an art major. At Home Depot, I get free discount on hammers and nails.”

Read the full article on ESPN.com