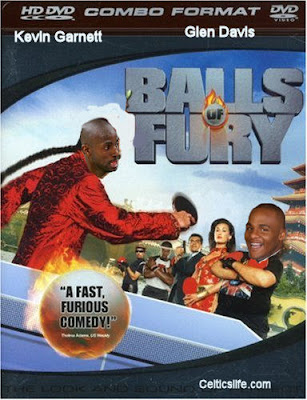 A couple of weeks ago, WEEI's Green Street reported that KG was in China and having a great time playing table tennis.  What they didn't tell you was that KG was actually over there training for his new role in the remake of the movie Balls of Fury.  Also making an appearance in the movie is Glen "Big Baby" Davis who appears as KG's groupie on the Table Tennis Tour.   It is reported that KG has brought a new level of intensity to the game of table tennis where he has introduced the art of trash talking. His opponents don't quite know what to make of his comments on the size of their balls.   This is definitely a must see this "Lockout" summer.

About Afternoon Delight: Every weekday at 3 PM Eastern time, Celticslife.com posts an original (most of the time) humorous creation for your delight. Check back Monday for more, or view past Afternoon Delight postings.