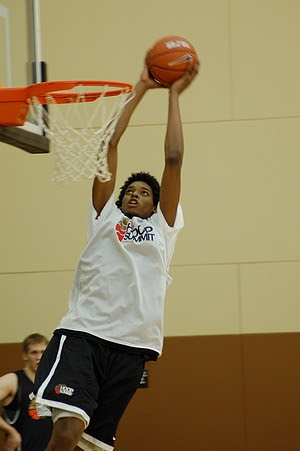 The departure of Nenad Krstic for CKSA Moscow makes the Celtics need for a big man even more urgent.  As of right now, their only center is Jermaine O'Neal.   Hopefully Danny will find a big man prospect that is promising enough to take in the draft.  One of those prospects is Lucas Nogueira, who was in Waltham for a workout on Tuesday. On Chad Ford's big board, Nogueira is ranked #36 overall, and #5 among centers.

The Brazilian big man is 18 years old and will turn 19 in July and is one of the youngest players in the draft. He is 7'0" tall and 225 lbs with an impressive 7'6" wingspan and a 9'3" standing reach. Like the old saying goes, you can't teach size. Draft Express has him going #26 to the Mavs. Chad Ford doesn't have him going in the first round. He is projected by most mocks to go somewhere toward the end of the first round.

Nogueira opened some eyes as he dominated the FIBA Americas U18 Championship. He had 27 blocked shots in five games during the tournament. He scored 22 points, pulled down 14 rebounds and blocked 3 shots in the game against Team USA.


Nogueira comes into the draft as Brazil's next big hope following in the shoes of Nene and Leandro Barbosa, and Anderson Varejao. He is one of the most promising international players coming up in this draft. At just 18 years of age, he has a great deal of potential. He is very athletic and runs the floor like a gazelle. He makes quick moves and can change directions very quickly. He is an excellent shot blocker using his length and leaping ability to swat shots. He is also an excellent rebounder with good anticipation. Defensively, Lucas has incredible potential with his size, length and mobility. He can make a major impact on a game with his shot blocking ability.

Nogueira needs to bulk up. Without adding some muscle, he won't be able to stand his ground against the stronger NBA centers. With a very wiry frame, he should be able to add some weight and muscle successfully without diminishing his agility and athleticism. His offensive game is raw and he needs to work on developing his offensive moves. He has very little post game, but he has decent touch on his shot and is an outstanding finisher around the basket, able to throw down some very impressive dunks.   There have been some questions about his attitude,  Some have reported that he doesn't work hard enough and has a star's attitude already.  Joining a veteran team with hard working stars like Ray, Paul and KG would be a good situation for him.

Nogueira's nickname is "Bebe" which translates to "baby". How ironic would it be to replace one big Baby with another. With his size, mobility and athleticism, he might be worth taking a chance on him with the 25th pick.  Danny could add size and athleticism all in one player.