What the Hell Happened to...Togo Palazzi?

Imagine getting a championship ring and not being on the team at the end of the season (this would be like Brandon Wallace getting a ring in 2008; hell Wallace won't even get a WTHHT since he technically never played a regular season game for the Celts!).  He wore #12, long before Von Wafer, and in this week's episode of WTHHT, we remember Togo Palazzi.

This Celtics first-round draft pick is considered a living legend on the Holy Cross campus.
Togo Palazzi played three seasons with the Celtics (1954-57) and is listed on the roster as a member of the 1957 NBA Championship team, a season in which he was sold to the Syracuse Nationals midway through the season.  How was Palazzi able to appear in 21 games by November 29, 1956 is beyond me.  He was sold to the Syracuse Nationals on that day.


"I'm on that first world championship team; if you look in the record books they have me listed," said Palazzi. "When they had the dinner I was with Syracuse and they didn't consider me part of the Celtics, but in all the media information I am listed on the team."

What could Brandon Wallace possibly make of all this?

After three more seasons with the Nationals, Palazzi called it quits.


"I had my best games in my career with them (Nationals) and probably did the right thing for me because I was able to prolong my career from three to six years," Palazzi said. "I was sad to leave and would drive to Boston with Heinshon and (Bob) Cousy every day. But I wanted to prove I could be an NBA player, and I did."

After his playing career Togo began doing A LOT of coaching.  He first coached Babson College, but left after the year, and he then opened a sporting goods store in Worcester but that didn't work.  He proceeded to then coach at St. Mary's College High School in Worcester, MA.  After that, he'd end up at Holy Cross as an assistant (no official word on whether he sat on the bench or behind the bench like this guy).  After moving onto head Women's Coach at Holy Cross, he'd actually coach the Framingham State Men's Team for 6 seasons (between 1991-1997)

However like John Bach, Togo is still involved in basketball.  During the summers he runs the Togo Palazzi Basketball Camp at the Houghton Elementary & Chocksett Middle School in Sterling, MA.  He has an opinion on basketball today (with a hint of Otis Birdsong-Jeff Judkins):

In regards to his current favorite NBA player:


I like a lot of guys. I like Lebron James – he’s a great player, there’s no denying it. I love watching the Celtics. I love watching Ray Allen, seeing how he moves without the ball to get a shot. Garnett and Pierce are great players too. Inside, I think Dwight Howard will be a force, if he gets a touch. 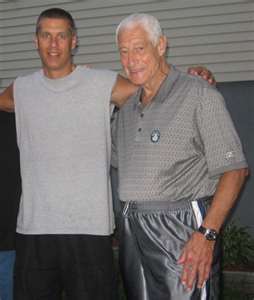 And in regards to how the game of basketball has changed since when he played:


There’s no doubt it has. I’d like to think otherwise, but there’s no denying it. There are guys that played when I played that could have played today. Players are stronger, bigger faster, quicker, more talented. We had players that were extraordinary, but the reverse layups, the dunking, some of the players that do things today – the passes and stuff, are of this age. I wonder what it will be like in the future. We all like to think we could play in this age. But trying to go against those guys, wow! The shot blocking is one of the most important things that’s changed the game, and of course the dunking. When we played, you didn’t block a guy’s shot because if you did, he’d kill you on the next play. And it was the same thing with dunking. It was an unwritten law that you didn’t do those things because you were in danger if you did. Players shoot for a better percentage today, too. I think players today get too much money, but the fans get their money’s worth. The game has really developed.

Togo says the players get too much money today but remains classy and explains the fans also get their money's worth (how do you like dem apples Birdsong?).  Based on the picture I lead off this article with him speaking at a Celtics practice, it seems he respects today's players.  Hopefully they respect him as well.