Pippen: LeBron may be the Greatest Ever 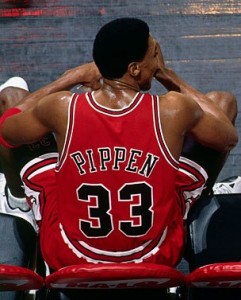 
Scottie Pippen had a front-row seat to watch Miami's LeBron James help oust the Chicago Bulls from the playoffs, and the Hall of Famer believes James might supplant Pippen's former running mate Michael Jordan as the greatest player ever.

"Michael Jordan is probably the greatest scorer to play the game," Pippen said Friday on "Mike & Mike In The Morning" on ESPN Radio. "But I may go as far as to say LeBron James may be the greatest player to ever play the game because he is so potent offensively that not only can he score at will but he keeps everybody involved.

Can the Bulls get a refund on that statue they just made for Pippen?