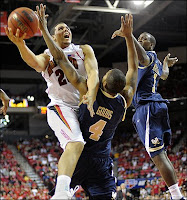 Second in our draft profile series is Jordan Williams.  Of the 20 mock drafts I checked out, 7 of them had the Celtics drafting Jordan Williams.  With the Celtics needing to fill in at the center spot, taking a big would make sense.  Williams is the classic tweener big that Danny loves to take (Glen Davis, Leon Powe, Luke Harangody, etc).  Williams is a center who is 6' 7.75" without shoes and 6'9" with shoes.  He has a decent wingspan of 7' 1/4 " and an 8' 10.5" standing reach.  While there have been successful centers at 6'9" such as Clifford Ray, Bill Russell and Dave Cowens, it takes a special set of qualities to be successful at that height.    Williams may or may not have those qualities, but he seems to be a hard worker and willing to work on the areas that he needs to improve.

The Celtics could possibly see Williams as a replacement for Big Baby, if he decides to sign elsewhere.  Like Big Baby, Willaims has struggled with his weight.   When Williams arrived at Maryland he weighed in at 281 lbs. When he started to consider going pro, he knew he needed to get serious with his training and his weight. After nearly two months of workouts off the Las Vegas strip at the Impact basketball facility with trainers Joe Abunassar and Andrew Moore along with a change in his diet, Williams weighed in at 247 at the draft combine. He tested out at 12.1 percent body fat, which was third-highest of the 54 participants at the combine, but it is also a 2 percent improvement from when he left Maryland.

While many of the mock drafts had Williams going to the Celtics, others had him anywhere from mid first round to late second round. His size and his struggles with his weight may have some teams a bit hesitant to take a chance on him. His strengths include the fact that he is a strong, physical post presence. He has the ability to muscle his way to the basket. On the offensive end he has a soft touch around the hoop. He is also an excellent rebounder on both ends of the court and that is a quality the Celtics could very much use as they struggled on the boards this season. He is one of the few true low post players in the draft.

As with every player, along with the positives, there are also negatives. Williams is not very quick and lacks explosiveness. He has greatly improved his perimeter game but still needs more work in that area. He struggles from the line and needs to improve his passing skills. He plays hard but not always smart. I've already discussed his tweener size and his struggles with conditioning and weight, but neither of these have stopped Danny from taking players in the past. Danny, Doc and Wyc have all voiced their desire to become more athletic with their additions in the off season. Williams is not very athletic. This, more than anything might make the Celtic look elsewhere in this draft.

Williams averaged 16.9 points and 11.8 rebounds per game in his last season at Maryland. When asked what he expects to provide for the team that drafts him, Williams had this to say,

In that way, Williams reminds me of Leon Powe who always seemed to find the rebounds among the trees. He definitely looks good in the video below, which shows some of his workouts at Impact Basketball.

Finally, what do Michael Jordan, Shaquille O'Neal, Darryl Dawkins, Kevin Love and Jordan Williams all have in common? They all have had a backboard shattering dunk at some time in their careers. Williams' dunk came in high school and can be seen below.

Check out all of Celtics Life draft coverage here.