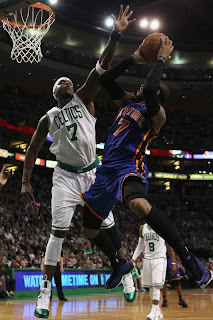 According to ESPN Boston, Jermaine O'Neal aggravated an old wrist injury during game 2 of the Celtics - Knicks playoff series on Tuesday night:


Celtics center Jermaine O'Neal aggravated a left wrist injury during the first half of Tuesday's game and needed to return to the locker room to ice what the team termed a mild sprain.

O'Neal originally tore cartilage in the wrist while taking a preseason charge in Toronto. He's worn a brace during the limited action he's logged this season, but appeared to aggravate the injury while taking a key charge from Stoudemire in the fourth quarter of Sunday's Game 1 triumph.


O'Neal could be seen grabbing at the wrist immediately after that play and further tweaked it during the first quarter Tuesday. He returned to the locker room with team physician Dr. Brian McKeon and iced the wrist after an eight-minute first-quarter stint. He returned to the bench early in the second quarter and checked in with 7:54 to go, hitting a jumper less than a minute later.

Jermaine will have a couple days to rest the injury before going into game 3 on Friday at Madison Square Garden, but it's hard not to look at JO's limited production in game 2 as opposed to game 1 on Sunday, where he scored 12 points, grabbed 4 rebounds, and blocked 4 shots. In Tuesday's game 2, he only scored 2 points, got 3 rebounds, and blocked 2 shots.

Hopefully the fallout in scoring is more a product of Rondo taking over offensively as opposed to Jermaine's aggravated wrist. We need Jermaine to contribute like he did in game 1, especially with Shaq out indefinitely.