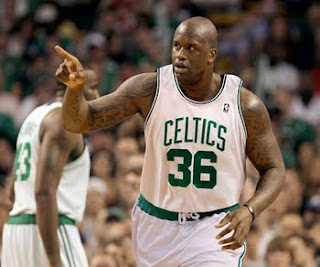 Earlier today, the Eagle Tribune's Bill Burt published an article that spread like wildfire across Celtics Nation, citing an anonymous source who claimed that Shaq was done for the season.

Shaquille O'Neal may have worn a Boston Celtics uniform for the last time. In what would be a crippling blow to their chances of winning a title, the Celtics are going forward as if the affable center won't be returning to team for the playoffs, according to an NBA source...

The Celtics came to this conclusion after Shaq failed to complete one simple sprint up and down the court during a "conditioning test" on Saturday, before he limped off the court in Waltham...

"If he were to come back, it would have to be a miraculous recovery," said the source, who requested anonymity. "And at his age (he turned 39 on March 6) and physical condition, the Celtics have planned accordingly."

A lot of "mays" and "ifs" have been used in the statement from the anonymous source. As Ben Rohrbach from WEEI Sports Radio points out:

Doc Rivers addressed the topic today after practice, and told CSNNE.com "I know that's not true. He's going to play. I just don't know when."

Shaq's injury is of a nature that surgery won't fix it, and it has not been responding well to cortisone shots. According to the Celtics team doctor Brian McKeon, "[Shaq's] actually made progression every day. This is a tough injury. The blood supply in this area is so weak and so poor . . . it needs time. I was telling Danny and the coaches, in the last 20 years of medicine, this is one area we have made no progress. It's just time. It's hard to get enough healing potential in that area. The longer we wait, the better chance he has of being healthy."

Danny Ainge added, "It's not like there is this magic test. The test is, does it hurt? You run up and down the court and does it hurt. That's the test. And can you play."

The reports from Rivers, McKeon, and Ainge give Celtics fans hope that Shaq will return at some point. But several questions remain:

1. How effective will Shaq be if he does return, especially if he can only play limited minutes?

2. Are Ainge and company holding back on us? As pointed out by WEEI's Paul Flannery, "We asked Ainge on Saturday if there was a point when the team would say [Shaq's] not coming back. He said 'When the season's over, I guess.' This can either be interpreted as "we will never completely rule him out" or "we aren't going to admit Shaq is done until the season is over."

Whether or not Shaq returns, Celtics fans can look at Jermaine O'Neal's performance in game 1 of the playoffs and hope that he can continue to play at that level. If JO's recent injuries will allow him to continue the production we saw from him in game 1, Shaq's return (or lack thereof) would become less of a concern. Let's just hope for the best, but not be surprised by the worst.