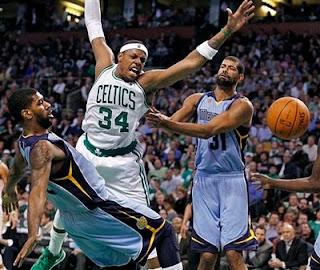 It's normally Paul Pierce or Ray Allen making the clutch game winning shots for the Celtics. Yet, that wasn't quite the case tonight as Pierce didn't get his chance until just 4.2 seconds were left in the game.

Rajon Rondo, Glen Davis and Pierce each missed shots that could have tied or won the game with the final seconds ticking away as the Boston Celtics fell to the Memphis Grizzlies 90-87 Wednesday night at the TD Garden in Boston, MA.

Former Celtic Tony Allen was overjoyed to beat his former team on their home court, he scored eight points and had seven rebounds on the night. However, he wasn't the only former Celtic excited to get back at his old team. Leon Powe had a big game, tying Zach Randolph for a team-high 13 points off the bench.

The Celtics got their best chance to take the game trailing by one on a fast break with 27.9 seconds remaining. However, it wasn't the C's best offensive weapons, Paul Pierce or Ray Allen, taking the shot. Rondo decided to keep it himself. His floater didn't go and the Celtics would never climb any closer.

Memphis held a huge advantage in the paint, outscoring Boston 52-26 under the basket. The Grizzlies attempted 16 more field goals than the Celtics, shooting 44.6 percent on the night. The Grizzlies also lead the league in steals and Boston was very much their victim tonight. Memphis had 12 steals as the Celtics turned the ball over 20 times.

The Celtics also had 12 steals, seven of which came from Rajon Rondo. Rondo had a double double on the night, with 11 assists and 11 rebounds while also contributing six points. Paul Pierce led Celtics scorers with 22 points, including 18 in the second half. Ray Allen added 14 points, drilling 3-of-7 shots from behind the arch. Glen Davis added 12 off of the bench while Jeff Green and Kevin Garnett each scored 10 a piece.


For Memphis, Marc Gasol had a double double with 11 points and 11 rebounds. Sam Arthur and OJ Mayo each added 11.

A 10-4 Grizzlies run opened up the third and had them leading by as many as five points. The Celtics responded with a run of their own though, back to back treys from Allen and Pierce highlighted a 17-5 run by the Celtics that had them jumping out to their largest lead of the game, seven. Yet the Grizzlies closed out the quarter scoring four unanswered for the second time of the night.

The fourth quarter started out with two teams deadlocked, as the game changed hands six times in the first five minutes. The Grizzlies were the first to break free from the standstill, scoring eight unanswered to take a seven point lead.

The Celtics responded with a rally of their own, pulling within one point with the final minute ticking away.

Boston had a chance to take a lead on a fast break but a Rondo floater missed it's mark with just 19.9 seconds to go. Forced to foul, the Celtics watched Mike Conley make both of his free throws. Trailing by three with the seconds ticking away, it was the unlikely Big Baby launching a three to tie the game, which didn't go. However, Marc Gasol missed both free throws, giving the Celtics one final chance to send the game into overtime with just 4.2 seconds remaining. This time it was Pierce missing the three -- giving the Grizzlies a 90-87 win.

While no team lead more than seven in the second half, the Celtics had to overcome a double digit deficit in the first.

It was a low scoring first quarter that saw the Celtics shoot just 33.3% as they were outscored 20-15 in the opening frame. That point total for the C's nearly matched their season low of points scored in the first quarter, which was 14 in New Orleans last Saturday. That game, of course, featured a come from behind rally by Boston, where the C's overcame a double digit deficit against the Hornets at home. The story was no different in the first half tonight against the Grizzlies.

In the second quarter, the Celtics fell behind by as much as ten. Memphis, fueled by former Celtic Leon Powe's team-high nine first half points, walked all over the C's second unit.

It looked like it could've had the making another blowout. However, the Boston comeback came a little earlier than it had the past two games when the starters took the court again.

After taking charge in the fourth quarter against the Knicks two nights ago, Paul Pierce was a mere 0-for-3 from the field in the first half. However, he assisted on one of two Ray Allen three-pointers which -- along with an invigorated Rondo (who had six first half rebounds) -- helped spark a 19-4 Celtic run which saw the green leading by as many as five with the final minute of the half ticking away. The Grizzlies responded with four quick unanswered points on dishes from Mike Conley to pull back within one at halftime, 45-44.

The Celtics fall to 50-20 and are now one full game behind the Chicago Bulls. They next play host to the Charlotte Bobcats this Friday the 25th at 7:30pm.