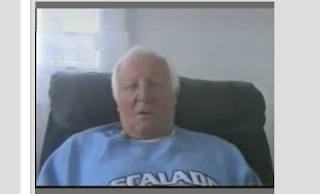 Yes there was a guy by that name that played for the Celtics, and we remember him in this week's WTHHT.  It's not someone living in Astoria, Queens that I made up.  If you thought "S-z-c-z-e-r-b-i-a-k" was tough to spell, imagine spelling out "T-s-i-o-r-o-p-o-u-l-o-s" on the back of a jersey.  Fortunately when Lou played for the Celtics back in the 1950s, they didn't have their last names on the back.

Lou Tsioropoulos (pronounced Soo-rop-o-luss) was born in Lynn, Massachusetts and attended Lynn Classical High School Lynn English High, graduating in 1949, before going to the University of Kentucky.  In addition to playing basketball he was an All American high school football player recruited by many colleges.  Playing under Adolph Rupp at UK, he'd help lead the Wildcats to the National Championship in 1951 (sort of like this guy did in the late 90s) along with Frank Ramsey and Cliff Hagan.  Upon graduating from Kentucky in 1953, Lou (along with Ramsey and Hagan) were all drafted by the Celtics (Geez 3 Kentucky guys in one draft?  Are you sure the Evil Emperor didn't have something to do with that all the way back in the 50s lol?) 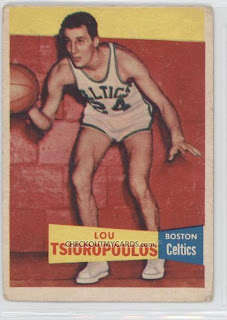 Lou would play 3 seasons with the Celtics, 1957-1959, backing up Tommy at forward.  He wore both numbers 20 and 29 during his stay (interesting picking 29 back then, when there had been zero numbers retired in Boston).  After the 1959 season, Lou would go to Greece and Iran for the United States Information Service (sounds like today's Basketball Without Borders) where he would teach basketball.  When Lou returned to the states, he had bad back pain and decided he couldn't play anymore, retiring at the age of 29.

After that, Lou first served as an athletic director at his church before eventually working in selling wholesale liquor in Lexington, KY.  By 1963, he'd make his way to Manual, TN where he'd coach basketball until 1968 at Manual High School.

I actually have a Lou Tsioropoulos story.  When I was a kid I was at a sports card show at the Yonkers Raceway.  I was about 9 or 10 at the time and had really gotten into collecting basketball cards and as an avid Celtics fan, was hoping to find some old legends cards.  I'd made it a point to have one card of every old Celtic who had their number retired.  Well I came across the 1958 Topps Basketball cards and the four Celtics they had were Bill Russell, Bob Cousy, Bill Sharman and Lou Tsioropoulos.  Russell, Cousy and Sharman were on my list since they're numbers had been retired.  But it was Russell's rookie card, and it was really expensive.  The Cousy and Sharman I decided on (I'd wind up getting a card for Russell from 1962 or so which was more affordable).  But the Lou Tsioropoulos was one I passed on (the one in this article).  But I still remember that and although I obviously never saw him play, his name has been etched in my mind for years.

Today, Lou is long retired from being the principal of Jefferson County High School and now lives in Florida.  Here's a video of Lou talking about a sports therapy facility he recommended and here's an even better interview with Lou from December of 2009 (wish I could embed these on the site- it'd definitely rival the Todd Day and Artis Gilmore videos).

*August 2015 Update*- Lou passed yesterday at the age of 85. CelticsLife expresses their condolences to Lou's family.