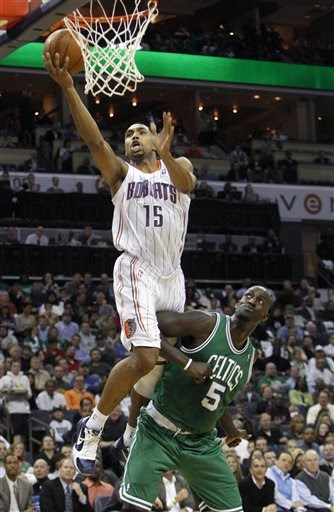 Wallace tallied 19 points and 16 rebounds. Gerald Henderson added 15, while Shaun Livingston finished with a season-high 18 on 7-10 shooting off the bench.

For the C's, Ray Allen dropped a game-high 25 on 9-17 shooting. Allen converted on all five of his free throws and both of his attempts from beyond the arc, moving him even closer to the all-time record. "Sugar Ray" now trails Reggie Miller's mark by only one three-pointer, and needs two to make the record his.

Paul Pierce added 22, connecting on 9-10 free throws, while Kevin Garnett recorded nine points and 13 boards. One night after carrying the offensive load, Rajon Rondo struggled from the field (4-13) and scored 10 points. The fifth-year PG did dish out 14 assists, but also committed six turnovers.

Overall Boston got killed on the boards. The Bobcats out-rebounded the Celtics 50-36.

Coming into this game, I expected a tough battle for all 48 minutes. With Marquis Daniels going down yesterday, the C's faced a tough Bobcats team with a short bench on the second night of a back-to-back.

Charlotte's Stephen Jackson was ejected in the 2nd quarter for arguing a foul call on Kevin Garnett. Jax picked up the initial technical, then a second one for not being able to shut his mouth.

The Celtics clung to a small lead for the majority of the game, and held a four point advantage entering the final frame. A Wallace three gave the Bobcats their first lead in a long time, 79-77. After the two teams exchanged baskets, Wallace split a pair of free throws to extend Charlotte's lead to three.

Eduardo Najera canned a three with 1:57 left in regulation to put the Bobcats up 89-83. After a Glen Davis jumper, the C's got a stop and Pierce cut the deficit to just two. The Captain was fouled by Najera on the way to the rim, and connected on both free throws.

After a Rondo missed three, Wallace collected the rebound. He was fouled by Pierce and hit one of his two. Livingston then fouled Pierce on a three, who made his first two, and intentionally missed the third. Wallace picked up his 16th and final board. After being fouled again, the longtime Bobcat closed the game out at the line, and finished the C's off 94-89.

With the loss, Boston drops to 38-13, while the Bobcats improve to 22-29. The Celtics return to action Thursday when the Lakers visit Beantown, in search of revenge from their Jan. 30 109-96 defeat.