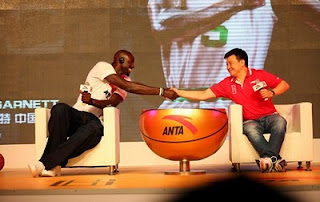 Remember when Kevin Garnett went to China and signed with ANTA shoes back in August? Well, he also writes a blog for them.

In his latest entry, transcribed here by ESPN's Chris Forsberg, KG talks about the Celtics' games against Washington and Cleveland and recaps the recent road trip to the west coast.

I like how Garnett calls Pierce P2 (P squared??). Great nickname. Here are some highlights:


On Perkins return against Cleveland:


"The Cavs game went quick and didn't play as much, which was good. 18 min was all I logged. They are struggling and we kept their losing streak going. It was also MY HOMIE'S FIRST GAME BACK! Big Perk came in and it was awesome to see him back. The crowd gave him a standing Ovation! Well deserved. Perk works extremely hard and it was great to play with him."

On being ejected from the Suns game:


"This game was physical as well and super ugly. I never apologize for my actions, as I play with passion. I actually got ejected for (the ref said) "talking too much". Can you believe that. It was unfortunate, and i hate to leave my team out there without being around to support them. Doc got ejected and then fined $15,000 for not leaving the court in a timely manner. A TIMELY MANNER. WOW

The game ended and we got worked over. It could've been the back to back and travel, but they played well."


On the Lakers game and getting smacked in the head:


"The energy was hyped in LA and thought we'd come out sluggish, but we came out early and applied force. Kobe and P2 were going back and forth exchanging baskets. Pau Gasol came hard at us, but we were ready for him. He did hit me with a "bow" and I needed 5 stitches. Didn't hold me out long and got me even more energized! The second unit really played well and it helped us get the lead and get a great victory. We executed our offense really well (60% field goal percentage) and locked down the defense for our victory. Another great win."

On Ray Allen's rare half time speech in Sacramento:


"Sacramento fought all night, but we got it done. Ray gave an emotional 1/2 time speech and got us going. If Ray's yelling, then somethings not right. He was right, we needed to play in control and not get caught up in the crap that Sacramento was trying to get us to do. Pulled it out and ended the road trip with a victory."

Here's a video of that "bow" to the head.