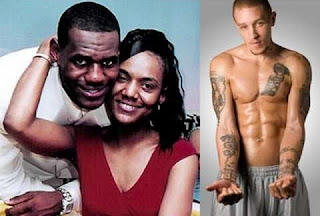 
Rivers left the door open for West to come back against Miami on Sunday. It will largely depend on how West does at practice, who went through his first full-contact work this week.

The Celtics may need him. Nate Robinson left the Lakers game at the 8:45 mark of the second quarter with a bruised knee and didn’t return. Without Robinson the Celtics bench was reduced to Glen Davis and Von Wafer.

After the jump, Lebron reponds to a Piston's fan who heckled the following line to him last night: "Is your mom going to Boston for Valentine's Day?"

Lebron's response: "I don't give a [expletive] what you say about me, don't be disrespectful," James said. "That's all I ask."

I'll be quite honest, I couldn't stand Lebron and his narcissistic self long before it became popular to be anti-James, but I must admit that was a fair and solid reply by Lebron. Almost made me alter this column. Almost. I expect Lebron to get the business on Sunday at the Garden and trust me if one Boston fan goes too far the national media will get on their soap boxes and paint all Boston fans as unruly.