What the Hell Happened to...Steve Kuberski? 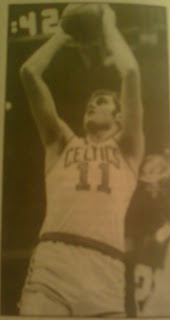 We've already remembered the last player to wear #34 before Paul Pierce and the guy that wore #8 before Antoine Walker.  This week in WTHHT, we remember the last Celtics player to wear #33 before Larry Bird, Steve Kuberski.

Steve was a star in high school in Moline, Illinois, the same high school as fellow-WTHHT Acie Earl. He was a 6'8" guy with the skills of a guard which was rare back in those days. (Strangely enough with his height, ball-handling and passing abilities he played a lot like a guard, and even somewhat resembled his numerical successor Bird in that regard.)

Initially Steve would attend the University of Illinois, where he would have been an even bigger star.  However the NCAA, who usually looked the other way when big colleges paid players, cracked down on U of I when they discovered they had a "Slush Fund" filled with donations from wealthy boosters. It came to light in the late 1960's, and the NCAA finally was forced to come down hard on Illinois. They fired their head football coach and head basketball coach, and a few others, and cleaned up the programs.

Unfortunately for Steve, he was one of the players who was found to have taken cash payments from the "Slush Fund" and Illinois cut him. After this, he decided to transfer to Bradley. He had 2 years of eligibility left, but after a very good year at Bradley, opted to go to the NBA and forego his final season.  He was selected by the Celts in the 4th round of the 1969 draft.  He'd spend his first 6 seasons with the Celtics (wearing #11 at the time) before being drafted by the Jazz in the 1974 expansion draft.  He was then traded from the Jazz (before playing a game) to the Bucks where he'd play one year.  The following year, 1975-76, he'd start with the Braves before being released and being signed back by the Celtics.  He'd start on that 1976 team, that only started 5-5, en route to the NBA championship.  Although he started it was really for super-sub Paul Silas to come in off the bench to provide energy (sort of like Greg Dreiling on Indiana who would start for Detlef Schrempf, play like 2 minutes, and then have Schrempf sub in for him).  He'd retire after 3 games with the Celts in the 1978 season, missing Larry Bird by two seasons.  This prevented Kuberski from pulling a move like Terry Catledge did with Shaq who was a rookie (Shaq was #33 at LSU and Catledge wouldn't give it to him as a rookie). 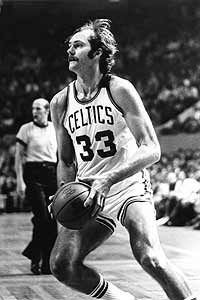 Some fun facts about Kuberski: 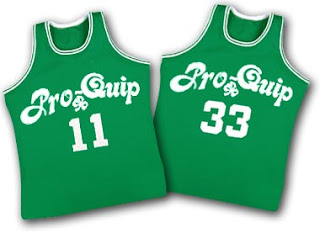 I actually saw Steve in action in Game 5 of the 1976 Finals.  He's extremely athletic, and really had a knack of being in the right place at the right time.  It's tough basing how good a player he is off one game, but I'd say James Posey might have been a poor man's Steve Kuberski.  Steve did the little things, like blocking out and making putbacks.  The intangibles.  And I get the feeling he did it at an even slightly higher level than Posey, who don't forget, did it very well in his own right.

Since 1982, Steve has been the owner of ProQuip Inc, a company that specializes in storage products like lockers, amongst other things and sells them to schools, country clubs and restaurants.  The weird thing is, that it's also located in Woburn, MA, which is where Hank Finkel's company is located.  You'd think the two might collaborate and join forces?  (Or perhaps Woburn, MA is a hotbed for WTHHT players).  He has been married since 1967 to Diane, who was a cheerleader at his high school.  Steve also has two sons, Jason and Matthew, the former of which works for ProQuip. 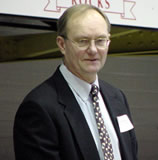 Steve also still has some family in the Moline, IL area and will occasionally visit, sometimes even for some games at Bradley.

Celticslife thanks Steve for his time with the Celtics and for helping contribute to the two titles in the 1970s. We wish him luck with all future endeavors.

Special shout-out to the site administrator at BradleyFans.com for filling in some valuable information on Steve's collegiate career.  Definitely check out his blog