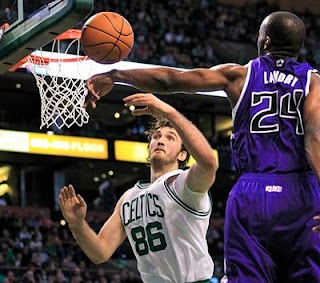 Paul Pierce led Celtics scorers with 25 points -- 15 of which came in the first quarter -- as Boston defeated Sacramento for the sixth straight meeting, 119-95.

The win put Doc Rivers as the third winningest coach in Celtics history with 309 victories. Doc trails only Red Auerbach and Tommy Heinsohn.

One of the key stats of the game was the Kings' 23 turnovers, 15 of which came on Celtics' steals. Boston took advantage of the extra possessions, shooting 52.1 percent from the field including 60 percent from beyond the arch.

With Jermaine O'Neal a late scratch for tonight's game with swelling in his knee, it was Semih Erden next in line to step up. Semih delivered -- bringing energy off the bench and ending the game with 10 points and 9 rebounds. Ray Allen chipped in 14 points making 4/5 3-pointers. Glen Davis finished with 12 points and 5 rebounds and Rajon Rondo added 10 points and 13 assists for his 15th double double of the season.

Carl Landry led Sacramento with 17 points and was trailed by Beno Udrih who netted 16 points and 5 assists. Samuel Dalembert was a bright spot for the Kings, adding 12 points and 6 rebounds.

The turning point in the game came in the third quarter. In the first half, despite building some sizable leads, the Celtics struggled to put the Kings away. It was a point coach Doc Rivers likely drove home to his players in the locker room at half-time. In the third quarter the Celtics responded and started to pull away from Sacramento and take control of the game, outscoring them 24-10 in the third frame and building a lead as high as 25.

From that point on, the game was never in doubt as the C's wrapped things up in a blowout, 119-95.

After opening the game by springing out to a 10-2 lead over the Kings, the Celtics perhaps started to feel a little overconfident. The Kings responded with a 10-2 run of their own, tying the game seven minutes into the opening frame and taking a brief one point lead 2 minutes later. The Celtics ended the fist quarter holding onto a six point lead.

In the second quarter, the Celtics expanded their lead to as much as 10, but despite Sacramento's nine first half turnovers, Boston could not put them away for good. The Kings went on another 10-2 run to climb within two points but the run was again staved off by the C's, who built the lead back up to as much as nine, ending the first half up eight, 57-49.

The Celtics improve to 29-9 on the season and next play Friday night against the Bobcats -- whom Boston held to 62 points in their last meeting.