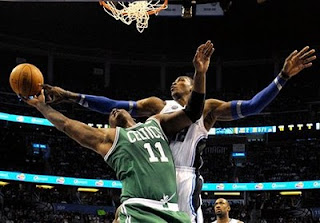 Orlando started the game scoring the first 13 points and ended it scoring the last 15 of 16 to seal the victory.

The Celtics - normally very efficient with the basketball - were held in check by Orlando. Boston shot a measly 34.6% from the field and were behind 39-45 in rebounding.

One of the key match ups entering the game was Shaq vs Dwight Howard. However, there wasn't much to watch this Christmas. Neither player had made a field goal until the 4th quarter and both were in foul trouble throughout the game. Shaq finished with 2 points, 1 rebound and fouled out of the game in the fourth quarter. Howard, meanwhile, had 6 points, 11 rebounds and 5 blocked shots. Howard started to make his presence felt once Shaq was forced to leave the game.

Kevin Garnett finished with a team-high 22 points on 10/14 shooting while Big Baby continued to put up a great performance, finishing with 16 points in 39 minutes. Pierce ended the game with 18 points but made only one field goal in the second half.


Jermaine O'Neal, who's been out since November 8th with a knee injury, scored on his first shot attempt late in the first quarter. The shot gave Boston it's first lead of the game. It proved to be O'neal's only field goal of the day, however. Despite Shaq's foul troubles, the other O'neal ended up playing second fiddle to Big Baby, playing for 10 minutes and finishing with 2 points and 2 rebounds.


Orlando was able to win the game despite poor performances by their best players throughout the majority of the game. Dwight Howard, Gilbert Arenas and Jameer Nelson combined for 6/22 from the field. It was Brandon Bass, Hedo Turkoglu and Ryan Anderson who kept the Magic close through much of the game. Turkoglu ended the game with 16 points while Anderson chipped in 10. Nelson made some clutch shots in the final minutes to seal the game for Orlando, finishing with 12 points.

Coming out of halftime, the Magic started to cut into the 10 point lead the Celtics had built in the first 24 minutes. They were able to dwindle it down to as much as 6, outscoring Boston 21-17 in the third quarter.

In the fourth, fueled by a Paul Pierce turnover and Dwight Howard's first field goal of the game, the Magic were able to pull within as little as 3. The Celtics built the lead back up to 9 but struggled to put the game away offensively.

Aided by Dwight Howard springing to life on the defensive end, the Magic cut Boston's 9 point lead down to 2 with just over 2 minutes left on a Jameer Nelson 3 pointer and Brandon Bass followed it up with a jumper to tie the game. Nelson, who'd struggled mightily all game, then took the lead for the first time since the 6 minute mark in the first on a 3-pointer with just over 1 minute left in the game.

On the following possession, Kevin Garnett went to the line but made only one of his free throws. JJ Redick answered by knocking down a jumper with 43.3 seconds remaining, extending the Magic lead to 4. The Celtics couldn't respond as Ray Allen put up a rare air ball. It was a failed possession that ended up sealing the game for the Magic, 86-78.

The Celtics had started to gain momentum in the first two quarters but failed to build on it in the second half.

After a frustrating night against Philadelphia on Wednesday, Paul Pierce was the story for the Celtics in the first half, totaling a game-high 16 points at half time. After opening the game in sluggish fashion, it was Pierce who would spark his team to overcome two deficits.

"We were still in the Christmas spirit at the start of the game and once we settled into the game we were good", said Pierce at half time.

Orlando was able to jump out to a 13-0 lead as the Celtics did not score for nearly the first 5 minutes in the opening frame. A stretch in which the Celtics turned the ball over 4 times and went 0/4 from the field. There was 7:19 left in the first quarter when Pierce nailed a jumper to give the C's their first points of the game. That proved enough to wake Boston up. Making up for lost time, the Celtics defense shut down the Magic - holding them scoreless for almost 6 minutes - as the offense scored the next 15 points to take the lead, 15-13. The quarter ended with the Celtics holding onto a 20-19 advantage.

After falling behind to Orlando once more in the second quarter, 32-29, it was again up to Paul Pierce to spark his team. After nailing a three pointer to tie the game, Pierce drilled a jumper 30 seconds later to take the lead and spur the C's on a 17-4 run. They closed the half with a double digit lead, 46-36.

After a second half collapse, the Celtics fall to 23-5 and next play on December the 28th, 7:00pm at Indiana.