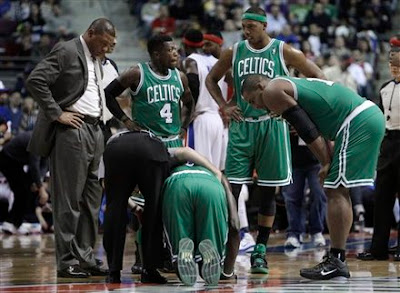 Back in the winter of 2009, the Celtics were defending NBA Champions. The 2008-09 season had begun matching their championship year toe to toe. They looked just as crisp and equally as dominant. It looked like Boston would be there in the Finals once again.

Then, in an instant, it all changed.

In a game against the Utah Jazz back in February of 2009, KG was hobbling after going up for a rebound. It was a non-contact injury that occurred on the jump -- reported as a right knee strain. That injury ended up dramatically altering the Celtics’ season and perhaps even NBA history. Months later, Garnett would undergo right knee arthroscopy and removal of posterior knee bone spurs and be lost for the season.

With KG gone, the Celtics squeaked by the Chicago Bulls in round one of the playoffs before being eliminated by the eventual Eastern Conference champion, Orlando Magic, in the next round. Who knows how far Boston could’ve gone if Garnett were still on the court.


“The Big Ticket” returned the following year, however, he didn’t look like himself. An observation noted -- to much controversy -- by the Lakers’, Paul Gasol during the 2010 NBA Finals:


“On Kevin’s part, he’s also lost some explosiveness…He’s more of a jump shooter now you could say, comes off the lane. Before he had a really, really quick first step and was getting to the lane and he was more aggressive then. Time passes and we all suffer it one way or another, but he’s still a terrific player, a terrific competitor, and he’s going to bring everything he’s got. You can count on that.”

Yet, this year -- over a full year removed from the surgery -- Garnett had regained that explosiveness. Entering Wednesday’s game, KG was averaging 15.4 points and 9.8 rebounds a game with 14 double doubles compared to the previous year’s 14.4 ppg, 7.3 rpg and 10 double doubles. Once again, he was looking like the player that had dominated Gasol in the 2008 NBA Finals.

Then, there was another scare against the Detroit Pistons on Wednesday night.

The Celtics lost the game, 104-92, but the focus quickly shifted from the game to KG’s knee in the first quarter. Garnett’s leg bent awkwardly while leaping for a slam dunk and the 6’11” veteran came up in obvious pain, grabbing his right leg. The city of Boston held its collective breath as he took a seat on the bench covering his face before being led to the locker room to have his knee examined by Celtics trainer, Ed Lacerte. The injury looked dauntingly similar to the infamous one he sustained almost two years ago in Utah.

“You've heard me say it before, injuries when no one’s around -- to me -- are always the severe ones,” said coach, Doc Rivers, after the game. “There was no one around him when he grabbed it so I thought it was a bad one.”

The Celtics, who’d been sloppy enough to that point, visibly lost focus as the game slipped away from them. No doubt their minds turned from the game to their season. Boston turned the ball over a season-high 21 times and gave up over 100 points while allowing the Pistons to shoot 55.7% from the field. The players were thinking the same thing the fans were,“Is it KG’s knee again?”. 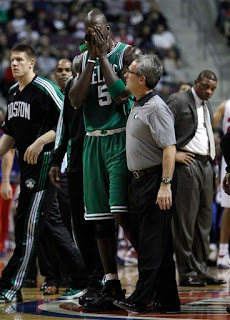 The C’s have already struggled with injuries this year. Jermaine O’Neal, Shaquille O’Neal, Delonte West and Rajon Rondo have all missed significant time while the team still awaits Kendrick Perkins’ return from ACL surgery. Despite the injuries, the Celtics have been able to persevere - holding onto the Eastern conference’s best record. This has largely been due to the fact that the Big Three has stayed healthy. If they were to lose Garnett for the season, it would be too much to overcome. It’d be hard to imagine the Celtics making a return trip to the NBA Finals without their core intact.

An MRI is scheduled for Thursday when the team returns to Boston, however, it appears to not be as serious as it first looked. The major concern was that KG had re-injured his right knee. Oddly enough, Garnett had done just that two games after Christmas last year against Golden State. He ended up missing 10 games and didn’t regain form until the playoffs.

However, the team officially announced on twitter that it was a “Muscle injury to the outside of his right leg, below the knee and above the ankle.”

The Celtics have hopefully dodged a bullet. The success of their season rests on their ability to stay healthy, something they haven’t been able to do for the last two years. Garnett’s injury, though possibly not serious, is a reminder of how fragile success can be in sports. In an instant, a team’s championship hopes can be snapped with the tear of a body part.

For over three quarters it seemed as if the chance to raise Banner 18 in 2011 were squashed. Now if the Celtics get there, they can appreciate it just a little bit more. They could’ve lost that opportunity on Wednesday night.