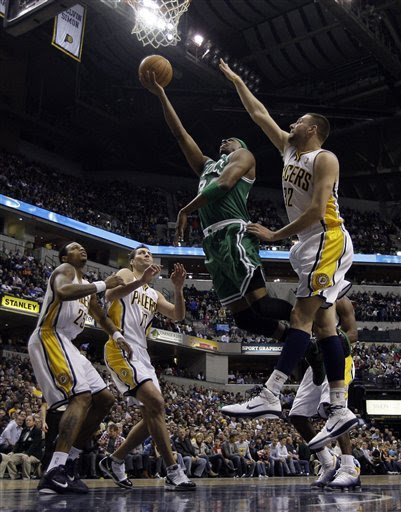 After losing their first game in over a month on Christmas day, the Celtics bounced back tonight and defeated the Pacers 95-83.

Paul Pierce scored a game-high 21 points, making 8 of 14 field goal attempts and all three of his three-pointers, while filling up the stat sheet with seven assists and five rebounds.

Indiana controlled the first three quarters of the game, leading by seven after the 1st quarter, a pair at the half, and just one point entering the final frame. The Pacers lead reached it's peak at 12 points when Mike Dunleavy scored a driving layup 3:22 into the 2nd quarter.

The Celtics took their first lead since early in the contest when Daniels converted a layup 52 seconds into the 4th quarter. That basket sparked a 10-0 run capped by a Ray Allen corner three to raise the lead to 77-67.

Despite a hard-fought effort from Indy, the Pacers were unable to come within six points after Ray's trey and eventually lost 83-95. Quis played his best quarter of the year closing out the game and embarrassed T.J. Ford on multiple occasions.

With the win, Boston improves to 24-5 on the season, while the Pacers drop to 13-16. The Celtics travel to Detroit for a meeting with the Pistons tomorrow night. Tipoff is at 7:30 in the Palace at Auburn Hills.