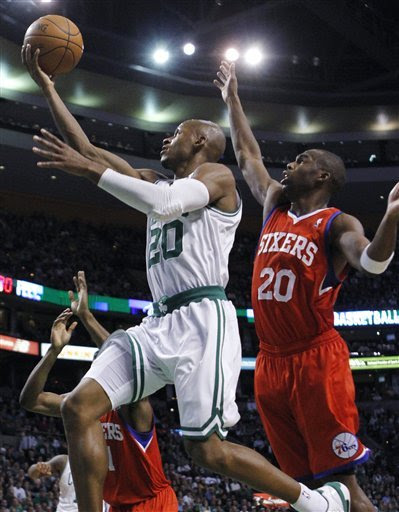 The Boston Celtics defeated the Philadelphia 76ers 84-80 tonight to extend their league-high winning streak to 14 games.

Ray Allen scored a game-high 22 points, dished out 6 assists, and pulled down 4 rebounds. Boston's starting frontcourt--Shaquille O'Neal and Kevin Garnett--combined for 25 points and 16 boards. Paul Pierce chipped in with 11 points, all coming in the 2nd half.

Just to note, The 76ers recorded 18 fouls, while the Celtics got called for 23. That difference was much greater before the 4th quarter.

The Celtics started the game with very sloppy play. Boston had a few early turnovers, two credited to Nate Robinson.

Allen scored 11 1st quarter points, and was mainly responsible for Boston's 6 point advantage heading into the second frame. Boston's advantage was quickly erased in the 2nd quarter, as the Celtics only managed 15 points in those 12 minutes. The 76ers led 44-38 going into the break. Those 38 points tied for a season low in a half.

Philadelphia also was unable to hold its lead. The Sixers' offense stalled early in the 2nd half as Boston went on a  14-2 run. KG capped the run with 6:41 left in the 3rd quarter, knocking down a pair of free throws to give the C's are 54-50 edge.

Heading into the final frame, Boston led by 3. However, that edge quickly turned into a deficit. Trailing by 4, With just over 5 minutes left, Paul Pierce stole a pass intended for Iguodala, slammed home a dunk, and was hit in the face (not that the refs bothered calling it).

After Battie climbed over Pierce's back for a tip-in (again no call), Shaq hit a pair of shots from the charity stripe. After Garnett and Holliday exchanged jumpers, the Big Ticket converted two free throws to knot the score at 76-76 with just over 3 minutes in regulation.

After Pierce hit a pair of free throws, Lou Williams knocked down a runner to re-tie the contest at 78 apiece. Ray Allen continued a Celtics theme, getting back to the free throw line and hitting Boston's 9th and 10th FTs of the 4th quarter.

Next, the C's were finally able to get a stop on defense, forcing Iguodala into a contested fadeaway jumper. Pierce swooshed an elbow jumper of his own to put Boston ahead by 4 with just over 1:30 on the clock.

After Brand hit a jumper, he hacked Shaq in the post. Immediately after the foul was called, Brand sarcastically rushed to the bench as it was his 6th foul.

O'Neal missed both foul shots, but Iguodala slipped up once again--this time literally. The Sixers star pushed off of Pierce (no call), lost his footing (again no foul call), and finally had the ball taken away from him by Garnett.

After an Allen miss, Garnett rejected Iguodala at the rim and Boston recovered the loose ball. Philadelphia was then unable to foul the C's until they got a hold of Ray with just 5.6 seconds left in regulation.

Andres Nocioni missed a trey and Glen Davis collected the board to close this one out as Boston prevailed with an 84-80 victory.