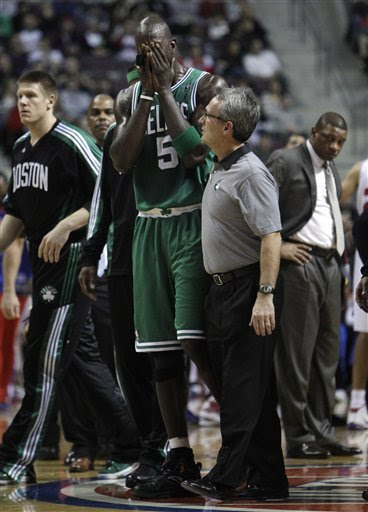 The Detroit Pistons embarrassed the Celtics tonight, winning 102-94. The real loss for Boston tonight was, however, the loss of star forward Kevin Garnett.

With 2:38 left in the 1st quarter, Garnett planted on his right foot to go up for a dunk and upon dumping the ball in the hoop, hung on the iron wincing harshly. After limping to the sidelines, KG collapsed and held his hands over his face, hiding his anger.

He returned to the locker room after the "lower leg injury" mostly under his own power, and leaned on trainer Ed Lacerte going to and from the x-ray room.

Though the test showed no break in KG's leg; the same leg that kept him out the majority of the 2008-09 season and left him a shell of his former self until as of late. It is reported that more indepth information will be released later this week, after more tests are done.

Paul Pierce scored 33 points, while racking up eight assists, five rebounds, and four steals in Boston's losing effort. Ray Allen and Glen Davis were the only other two Celtics who reached double-figures in the scoring column with 12 points apiece.

This was a game the Celtics never had command of. They trailed by eight at the half, and 12 at the end of regulation. Boston played awful defense and were unable to gain any kind of rhythm offensively.

For the Pistons, Tracy McGrady led the way with 21 points and eight assists. Tayshaun Prince (21) and Charlie Villanueva (18) were two more of six Pistons who scored at least 10 points in tonight's contest.

With the loss, the Celtics drop to 24-6, while Detroit improves to 11-21. Boston plays again Friday afternoon when the Hornets visit Beantown for a 3:00 PM ET showdown.