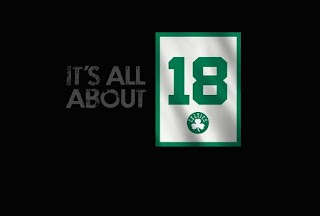 The Boston Celtics are exactly where they were last year after Christmas. Record wise.

Winners of 14 straight they came into Amway Arena in what Karl said is Brandon Bass' biggest game of his entire career. Orlando managed to squeak a win away from the Eastern Conference Champs and while mostly everyone is at awe in this newly revamped Magic roster (hailing them the new streakbusters), we all know better... the playoffs aren't held in December.

Ask Kobe and Phil. They know what I mean.

I have personally never forgotten the above record (23-5) because a year ago I had high hopes the Cs would dominate the league with the best record, and win it all again in The Finals. Both of my wishes didn't come through, but not without a fight.

Last year, after achieving that number, the Cs had to brace themselves for a series of unfortunate events ranging from injury to illness to personal issues that resulted in a 27-27 aftermath. When the dust cleared out in the regular season, Boston had a 50-32 record. Believe me, I thought we'd never hit 50 that season, the way our team inconsistently and unpredictably performed.
But as the Law of Rhythm states, life has its ups and downs and there is a time and season for everything. For the Celtics that time, they had already reached their "rock bottom". And come play-off time, with everyone back in good health, the only direction they were logically headed was nothing but up. Someone (presumably Doc Rivers or their own hearts and egos) flipped the switch back to "kill mode", and up they went from one series to another, crushing Dwayne Wade's Heat, LeBron's then Cavaliers, and Dwight's Elbow, er, Magic.

The script handed to Boston in the postseason was played to perfection, until the final moments of Game 7 in L.A. (I'll stop here, lest it evokes some emotional memories again).

Bottom line when you add all the tangibles and intangibles last season, Boston's never been hungrier than ever for another championship. Definitely, it's all about 18.
What happens this year after Christmas... after 23-5... is yet to be known. We can figure it out using all the stat sheets we can come up with, make every logical comparable analysis in Celtic history, or do the math with Kenny and Charles and give a straight-out prediction. Slim chance we'll get it right.

Because while this team is built on tradition. Its foundation is laid on its heart. And that, you can never measure.

Last year it was a rollercoaster ride until the last seconds of June. This year, we pray... we hope... and we believe... the Celtics will continue riding their winning ways en route to Banner 18.
This time don't ask Kobe and Phil. They'll figure it out in the end.