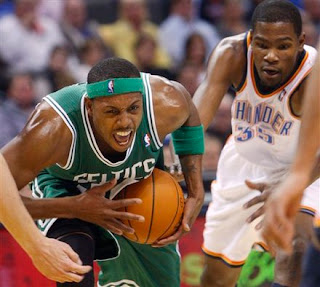 The Celtics held off a late run from the Thunder and were able to escape Oklahoma City with a 92-83 victory. The win improves Boston's record to 6-1, and drops OKC's to 3-3.

Ray Allen led the Celtics with 19 points, and Paul Pierce contributed with 17 points of his own. Rajon Rondo scored 10 points as well, while handing out only 10 assists. Nine Celtic players scored at least five points in Boston's well-balanced scoring effort.

Kevin Durant led the Thunder with 34 points, while Russell Westbrook netted 16 points and recorded 10 assists. However, only six OKC players were able to get on the scoreboard.

Boston won the first quarter again tonight, just like they have in every other game so far this season. Marquis Daniels had seven first-quarter points to lead the C's. Semih Erden converted a three-point play to give the Celtics a 28-21 lead going into the second frame.

The Thunder continued to struggle in the second quarter, managing only 16 points in those 12 minutes of action. Jermaine O'Neal showed his value on the defensive end with a flurry of blocked and well-contested shots. Nate Robinson hit a running three point as the buzzer went off to give Boston a 58-37 lead at the half.

Almost expectantly, Boston had a mini-collapse and allowed OKC to fight their way back into the game. The Thunder closed the third period on a 13-2 run and cut the deficit to just nine points going into the fourth quarter. Durant and Westbrook scored all 27 of the team's points in the frame.

Boston was however, able to stop the Oklahoma City momentum. After James Harden hit a quick three-pointer for the Thunder, the Celtics bench made a 10-2 run to re-extend the lead to 14. From that point on, OKC was unable to cut the lead to single-digits again until Harden hit another shot from beyond the arc with just 22.6 seconds left. It was too little, too late for the Thunder as Boston prevailed 92-83.

The Celtics play again tomorrow night in Dallas. The game against the Mavericks tips off at 8:30 PM.