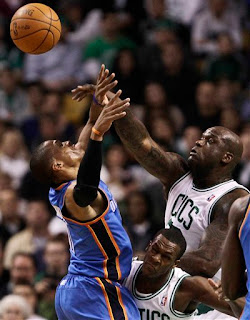 This was a hard game to watch as a Celtics fan. Boston simply lacked energy tonight. Without Durant it seems like  they didn't think they had to bring their A or even B game for that matter. Three offensive rebounds all night is unacceptable. Big Baby had his first really bad game of the year going just 2-10 and missing 3 critical free throws down the stretch. No one really played well in this game besides Shaq and he didn't even get any touches after the first quarter. When no one scores over 20 for the Celtics it isn't a good sign.

The Thunder played well at times but didn't play all that great either. Westbrook is the real deal and probably the most athletic point guard in the game. If he cuts down his turnovers he will be something special. I like Ibaka's game too. Besides that no one really impressed me.

Oklahoma City did their best to give the Celtics the game in the 4th but Boston just wouldn't accept the gift. The final period was almost unwatchable. The Thunder kept throwing up terrible shots early in the shot clock and the Celtics could not capitalize. I applaud them for making a bit of a run at the end but the reality is they did not deserve to win this game.

The good news? This doesn't mean anything in the long run and in the course of an 82 game NBA season is inevitable. If anyone gets truly depressed or starts drawing conclusions off this they should find a hobby.  The Celtics are fine and just didn't bring it tonight. We will bounce back and be fine.

One more note. If anyone gets upset that Wes Welker was wearing a Thunder hat please just stop. The guy is the toughest human being on earth and can do whatever he wants, short of wearing Jets or Colts apparel. Have an outstanding night.