What the Hell Happened to...Tyus Edney? 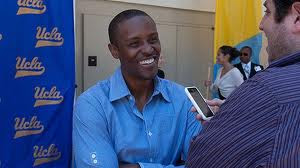 He was the shortest Celtic in team history until Nate Robinson came along.  He's most remembered for his tournament-saving coast-to-coast buzzer beating layup against Missouri in the NCAA tournament (costing me first place in a tournament pool).  He had a surprisingly impressive rookie year but then it seemed the league figured him out (sort of like this guy).  You may remember Tyus Edney.


After a senior season at UCLA where along with Ed O'Bannon and Toby Bailey he helped lead the Bruins to the NCAA Championship in 1995, Edney was selected by the Kings in the second round with the 47th overall pick.  He'd actually make All NBA rookie second team that season after 10.8 ppg and 6 apg in 30 minutes a night.  He'd start 60 of the 80 games he played.

That turned out to be the highlight of his NBA career.  He'd play the next season with the Kings before signing with the Celtics during the summer of 1997.  Being there during the Evil Emperor's reign didn't help his cause to stick in Boston long.  He'd play that one season for the Celtics wearing #20 and starting in 7 of the 52 total games he played.  I actually got to see Edney start one of those 7 games.  It was November 28th, the day after Thanksgiving, against the Suns.  And I have the ticket stub to prove it (uh-oh flashbacks to Eric Riley) below, on the right. 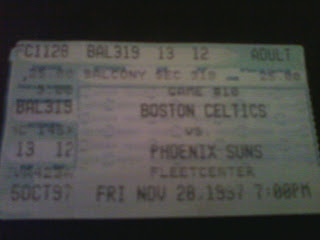 Edney actually had the chance to win the game in regulation but missed a floater at the buzzer.  The Celtics lost to the Suns in overtime, 112-108.  A couple of other interesting things from that game: Celtics guard Chauncey Billups played for a total of 5 minutes off the Celtics' bench (way to start Edney over Chauncey, Evil Emperor).  Steve Nash played 11 minutes off Phoenix's bench and had 3 points and 2 assists.  Of course he was backing up Jason Kidd who played 45 minutes that night.

Tyus would play 24 more games for the Pacers in 2000 but would have a lengthy European career where he was a premier player for many of them.  He played for Zalgiris, Benneton Treviso, Lottomatica Roma, Olympiacos, Climanio Bologna, Aziovmash Mariupol, Cajasol Sevilla, and Turow Zgorzelec.  Thank god I don't have to pronounce those all.  He finally retired after this past season after having won an Italian Cup MVP and made All Euro-league several years.

I must admit, Edney's NBA career surpassed my expectations, specifically his rookie year.  I'll never for the life of me, understand how someone like Edney makes it and sticks around for a few years while guys like God Shammgod and Kareem Reid don't.  They simply can't use height as an excuse.

Today, Tyus is the Director of Men's Basketball Operations at UCLA.