What the Hell Happened to...Grant Long? 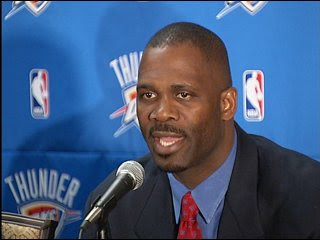 Today in WTHHT, we remember NBA journeyman forward Grant Long.  Long was picked in the second round of the 1988 draft by the Miami Heat, out of Eastern Michigan University.  He'd play his first 6 years in the league with Miami, starting a large percentage of the games he played.  He put up very solid numbers, including 14.8 ppg and 8.4 rpg in the 1992 season, the year Miami made the Playoffs as an 8th seed and lost to Chicago in the first round.  He'd be traded after just 2 games with Miami after the start of the 1994-95 season to the Hawks along with Steve Smith for Kevin Willis. 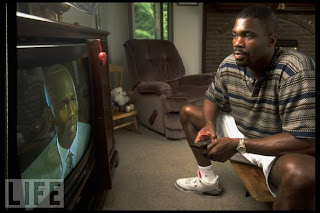 He'd play with the Hawks for 2 seasons where he still continued to put up double figures in scoring.  He then went to Detroit for 2 years, back to the Hawks for the lockout shortened season of 1999, and then to the Grizzlies for 3 years.
On January 16, 2003, Grant would be signed by the Celts, allowing himself to be qualified for WTHHT.  At the age of 36 he'd play 41 games for Boston that year, including 1 start.  And he'd actually play 8 playoff games with the Celtics too.  They were the final 8 games of Grant's NBA career as he'd retire after the season.

For his career he'd average 9.5 ppg and 6.1 rpg.  He'd even play over 1,000 total games (1,003 in all).  And he even started 673 of them.  Not too shabby for a second round pick.  I'm always extra-impressed by second round picks who are able to stick around for awhile.  For every Gabe Pruitt, Lester Hudson and Justin Reed, there's a guy like Long who makes it happen. 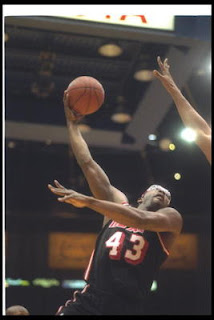 I remember reading somewhere at some point a long time ago, how Long epitomized the average NBA player.  He was about the average height during the middle of his career at 6'8 (you know when NBA guys were taller).  He had average dribbling skills.  The average jump shot.   I really think if he'd been on a better team he may have been more well known (instead of being known as another power forward with the name Grant who wore goggles).   It's an argument Bill Simmons makes often regarding time and place.  What if Bernard King was on those Laker teams in place of James Worthy?  Chances are King would be in the Hall of Fame and remembered much more than he has been.  If you ask the average fan, there's a great chance most people will remember Horace Grant over Grant Long.  But what if their teams were switched? (As for me I do think Horace was the overall better player since he was a bit bigger, had longer arms, could play spot minutes at center and was a better defensive player.  But what if it was Long and not Horace on those Bulls' teams with MJ and Pippen...)

I always liked Long's game and I thought if the circumstances were right, he could've been a key contributor to Celtics' teams if they were still competitive.  Unfortunately those paths never crossed.  When Long joined the Celtics it was the end of his career and even though he was a veteran, there was only so much he could do.  While Long was in the middle of his career the C's were mired in mediocrity.

Today Grant does the television color for Oklahoma City Thunder games.  You all know how critical I am of TV announcers but Long does a solid job.  No word on whether he chats with Thunder assistant Mark Bryant on what could've been during the Celtics playoff run in 2003.  Also oddly enough, you can find "I Love Grant" Long t-shirts on cafe press.  Oh wait I get it: it's a Long Sleeved Shirt that says "I Love Grant."  Tricky to read that when you have my mind...

***August 2014 Addendum***  Grant has been let go from the Thunder because of financial issues.

Long’s financial troubles came out in the open in July when KOKH-25 reported that Long had failed to repay a $5,000 loan from Larry Rowell, an Oklahoma City jewelry store owner. Rowell said Long had agreed to pay him back $6,000 in 45 days. Court records indicate several other businesses had filed lawsuits against Long.

Celticslife wishes Grant the best in getting his financial problems resolved.