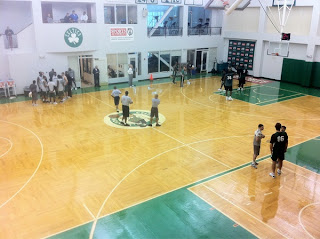 News and notes out of practice include some injury updates and fight aftermath.   Shaq sat out practice due to the bruise on his knee from the collision with Amar'e Stoudamire in Friday's game vs the Knicks.  While the rest of the team was practicing, Perk and Shaq did some relay style laps with Perk in the pool.  Shaq contends that he will be able to play on Tuesday when the Celtics face the Pistons.  Shaq told the media that he will be riding a train tonight as "Shaquita" as a way to celebrate Halloween.   I hope someone gets pictures.

Jermaine O'Neal was back on the practice floor, running with the second team.  Hopefully he can avoid another injury before Tuesday's game.    It is interesting that even with Shaq out, JO remained with the second team and Semih Erden (with a new haircut) got to play with the starters.  If Shaq can't go on Tuesday,  and with Jermaine struggling to find chemistry after missing so much time, we could see Semih get the start/.   It was mentioned at one time that Big Baby may get the start, but it looks like Doc is going for continuity with the bench and will keep Baby in his typical rotation.

Doc was quick to praise Semih and feels that he is going to be a very good player in the league for a long time.   He feels he is  good enough talent wise right now, but that the language barrier might be making it difficult for him to get all the plays and rotations down.

Delonte West also spoke out about the fight that seemed to take on a life of it's own as the reports were spread on the internet.    West said that both he and Von Wafer have moved past the reported fight after practice last week.   He chalked the fight up to both being very competitive and said that they are past it and they are all like brothers on the team.   He also said that many of the details reported originally were incorrect.  They even had a laugh about it with the help of Shaq and KG.  I can only imagine what those two were up to.

Avery Bradley suffered an ankle sprain during the first part of practice.  It was not considered serious and wasn't connected with the ongoing problems he's been having as the result of the surgery on his ankle this summer.